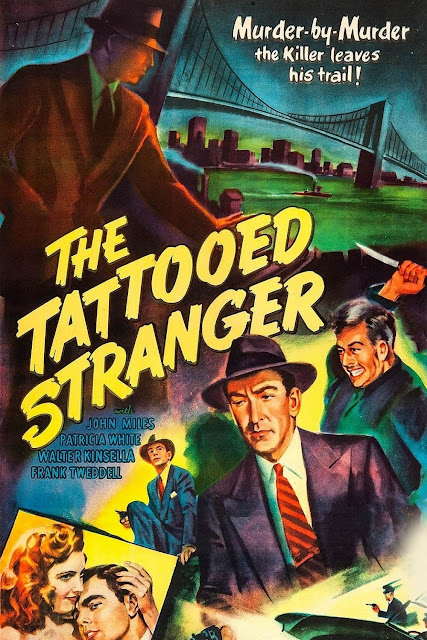 So....  I don't know that I'd want to actually recommend The Tattooed Stranger (1950) to anyone.  It's far more of a curiosity of production than it is a watchable or good movie, and in the right, riff-able hands, could be wildly entertaining.  Pre-film, Muller explained that it had been a producer of RKO's Pathe office, who wanted to try their hand at cheap narrative films, exploiting their guerrilla film making know-how from decades of documentary films  and using the wealth of actors in NYC.


And, yeah, the first part of the movie genuinely feels a bit like actors walking through a documentary as a body is found in Central Park and they investigate the crime scene.  It's less a detective film than a police procedural, high lighting the new scientific methods of police and their wacky college-derived methods paired with the usual pavement pounding and question peppering.  Plus, a blossoming romance between a detective and a botanist.

The acting is, honestly, stilted and one can guess that even a talented actor wasn't going to come off well under the circumstances (think Natalie Portman in a Star War).  But if there is something to sell the movie, it's the locations in New York in 1950 and just seeing the city at that moment.

The titular Tattooeed Stranger is a woman who has been shot so her identity is concealed, but she bears a tattoo - unusual for a woman in 1950, but, of course, now standard issue.  This unusual bit of artistry is key in tracking down the identity of the victim, and through that, the killer.  All really pat stuff in a 65 minute or so B programmer.

I dunno.  I've definitely seen worse, but there's not a lot here to suggest you rush out and spend money to see this one.  As always, there's interesting stuff to see, just to consider how and why it was produced, and those NYC 1950 shots, but I'm not sure it's exactly must-see stuff.