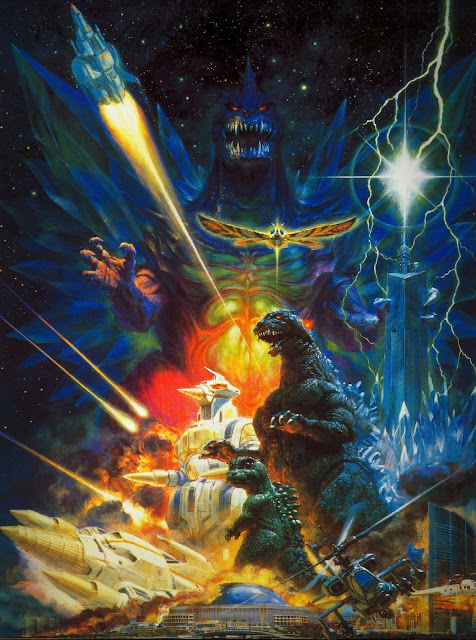 
SpaceGodzilla is, we're told through the craziest most speculative possible debrief known to humankind, a cell of Godzilla that went into space, passed through a wormhole where it picked up crystalline properties and came out the other side, twisted and evil.  Or something.  I dunno.  I couldn't keep up.

This film is in continuity with other films from this era, so we're back at G-Force with their weird school for telepaths, and multiple Godzilla containment plans, including "just kill him with this magic bullet" and "use telepathy and a sort of tracker dingus to drive him around like a remote control car".


There's two guys whose names I never caught who have no character arc but fluctuate wildly in motivations and job responsibilities.  Apparently they're sort of field agents/ pilots of not-MechaGodzilla, the incredibly goofy looking MEGOURA: Mobile Operation Godzilla Universal Expert Robot Aero-Type. Why does it have a drill for a nose?  Why, in fact, do drills figure so prominently in the overall design?  Why does it have at least three cockpits?  Needing to use an elevator to get to a tertiary escape cockpit seems like a design flaw you'd catch fairly early on.

There's also a sort of gamine telepath who really commits to some very iffy fashion choices.  A sort of bureaucrat lady who puts on a mesh wool sweater for way too much of the movie, and an older soldier guy with a vendetta against Godzilla who reminded me how cool it was to smoke in the 90's.

Our friends The Fairies show up to tell our telepath she needs to help out Godzilla to save the world from what turns out to be SpaceGodzilla, there's a complete waste of a story arc about the mafia kidnapping the telepath to try to get Godzilla for their own (now THAT'S an enforcer for your collections racket).  Frankly, the movie is all over the place and makes no sense, except for the very clear throughline about Godzilla defending Baby Godzilla from SpaceGodzilla, and then fighting with SpaceGodzilla.

Really, sometimes its funny to sit back and remember that our main plot is something Godzilla absolutely does not notice.  He's a big, green force of nature working on a scale that impacts humanity and is occasionally spiritual retribution for humanity's failings, but the events of these movies are gonna play out with only minor impact from the humans we're following around, even when they have a not-MechaGodzilla. 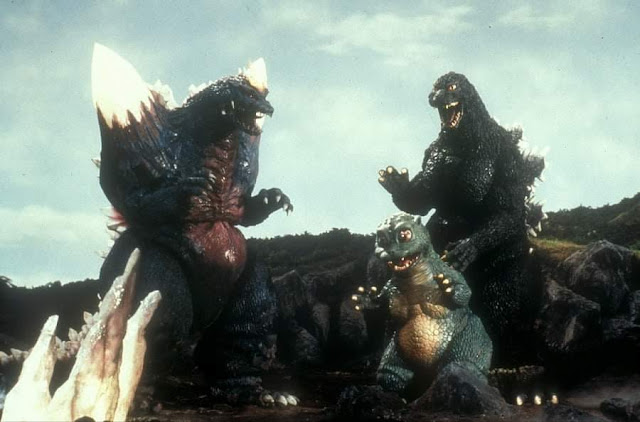 This movie is absolute nonsense, and is occasionally kind of fun, but there's a difference between delightful Godzilla chaos and incoherent storytelling and this one went in deep on that latter.  But at least Space Godzilla *looked* cool and the final battle had some interesting stuff going on.
Posted by The League at 4/26/2020 11:27:00 PM

Have you ever seeen Colossal, the movie with Anne Hathway?

Between COVID or an occasional Godzilla/Kaiju rampage across the country, which one would you pick?

Let's be honest - COVID is going to do less ongoing damage. It's going to leave city centers intact and it's not going to randomly stomp on people and irradiate the whole place. I am now uncertain what would happen in the case of a Godzilla rampage or monster battle. I now believe people would fight to stick around and watch and maybe shoot their guns at the monsters. Probably believe it was their right to own small nuclear bombs to fight off Kaiju. But at least I'd know Godzilla was coming and could do something about it.

but I also now believe there'd be some idiot with a Confederate flag hanging off his truck blocking the way to get away from Godzilla for reasons that made no sense but to him and whoever else read the right neo-nazi websites.

Every one of these feels painfully plausible