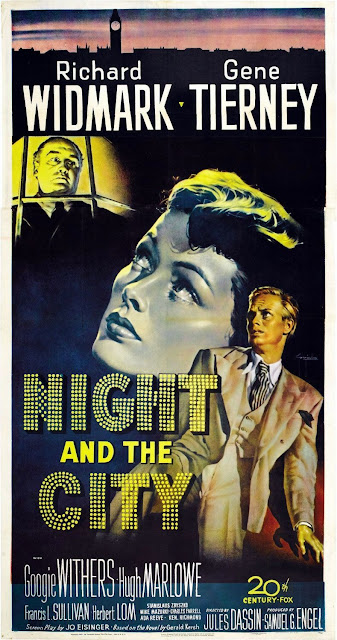 
There have been a thousand like this movie since, maybe a handful before, of a loser trying for the big score on a run over 24 hours or so.  I've not seen Uncut Gems, but it sure feels like it's cut from the same cloth.*  But I suspect a lot of filmmakers over the years have been trying to recatch the lightning in a bottle that is this movie.

Richard Widmark stars as Harry Fabian, an American ex-pat who has somehow wound up in London post-war, and sunk right into the underground.  He's always looking for his get-rich-quick angle, but his luck and angles never quite work out.  Tierney plays another American, a showgirl in a seedy London nightclub/ clip joint where Fabian picks up some scratch luring in unsuspecting Americans.

There's a robust cast of well-defined (and perfectly cast) supporting characters, from the club owner to the wrestlers, both aging artist and new dumb ape, all part of the world Fabian maneuvers, ducking and weaving and thinking he's one step from being on top and out, while everyone else sees him as a bottom feeder in a flashy suit.  Except for Tierney, who is foolishly in love with him (at the cost of ignoring the nice, young artist who also lives in her building).

Widmark is one of those actors that, even if you don't watch many old movies, you know at least from clips.  He's instantly memorable, and creates a stunning level of sympathy for his characters, who are often hoods in this era, when it seems they should be repellent.

She doesn't receive a ton of screentime, but Tierney is difficult to forget and the one innocent in all the proceedings.  By this time, Tierney had aged out of "ingenue" and was maturing in performance and appearance, and pairing her with Widmark works terribly well.  And, of course, her appearance is sort of the one mark of beauty in this otherwise shadowy, shady world.**

Dassin, the director, was essentially in exile by this point, having left the states during the HUAC hearings.  Just prior to his departure, he'd made three really terrific films, all categorized as noir: Brute Force, The Naked City and Thieves' Highway.   His understanding of down on-their-luck characters was astounding, and films like Thieves' Highway showed the eye he had for talent and for working with a DP.  Here he's partnered with Mutz Greenbaum (listed on this film as Max Green).  The London of this film is a perfect noir landscape of alleys, Piccadilly, construction zones around bombed out areas, basement night clubs and a mix of eras in a place as old as London that you just can't visualize in the States.  And, they give John Alton a run for his lighting money.

I hesitate to say much more.  Check it out.  It's a hell of a movie.

*I actually plan to watch this over the next few weeks.

**that's not to throw stones at Googie Withers, but Withers is playing such a crooked character herself, she doesn't get to play that role
Posted by The League at 5/02/2020 12:01:00 AM