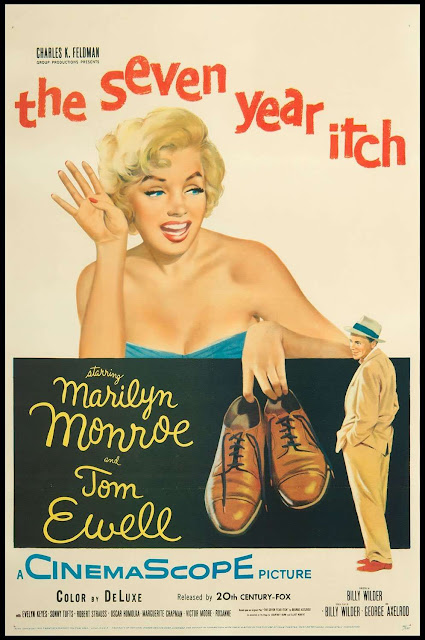 
The movie's tic is that it features visualizations of our lead's imagination - of a fairly boilerplate married-sort-of nebbish imagining women want him, that he's a lothario, what people will say as they pass the gossip, etc...

The comedy of Tom Ewell constantly talking to himself, switching back and forth between his loyalty to his wife and ideas traipsing through his head about his neighbor - who is seemingly oblivious to his internal monologues and occasional stabs as flirtation - has, unfortunately, been imitated to death.  You can't blame the play or film for this - imitation is the sincerest form of flattery, but it does leave the idea, which has been polished to a fine sheen through reuse, a bit creaky in its original form.

This film was one of Monroe's more signature roles, occurring at the height of her career - but also the only movie she appeared in during 1955.  Because: Monroe.  It also features the famed subway grate/ skirt scene about 3/4th of the way through the picture.

Marilyn Monroe is as funny as ever, and is seemingly almost spoofing her own image in this movie (there's actually a line I assume is left over from the stage play where Ewell compares Monroe's character to Marilyn Monroe).

Not in the film a whole lot, but always in the minds of the audience, is Ewell's wife, played by Evelyn Keyes, whom I know mostly from noir.  Anyway, my eyes about fell out of my head when I figured out who that was a few minutes into the movie.

But a lot of the humor is the same sort of stuff that shows up in cartoons of the next ten years and beyond, of those visualizations, Walter Mitty style, of what a great and handsome guy every Joe wants to imagine himself to be. And when watching everything from Family Guy to SNL, the dichotomy of the visual versus the reality - or cutting away to fantasies - is now remarkably familiar.  And still kinda works.

I did some Googling, and I was not wrong.  The movie had to drop some key elements of the original stage play thanks to the Hayes Code.  I'd be curious to see the play, partially to see if one of my suspicions about a continual set-up regarding the lead's wife seemingly not being available for his calls because she's running around with some guy at the resort (which Ewell is to distracted to really notice) turned into something at the end.  Instead, the film is incredibly pat - as was required by the code. Family, home and hearth must prevail.  Infidelity, according to the Breen Office, cannot be a source of humor - unless it's imaginary?

Anyway - it's a fine movie, and I'd watch it again.  It frankly had a stronger ending than I figured - ten years later they would have gone in for humiliation for laughter - and was genuinely sweet.  But as a movie seems to want to provide a very safe version of the everyman's vision of either a chance encounter/ affair - or under what conditions would Marilyn Monroe say nice things to you.  IE: I am not sure this movie could have been made ten years before 1955 or it wouldn't have felt horribly outdated by 1968.