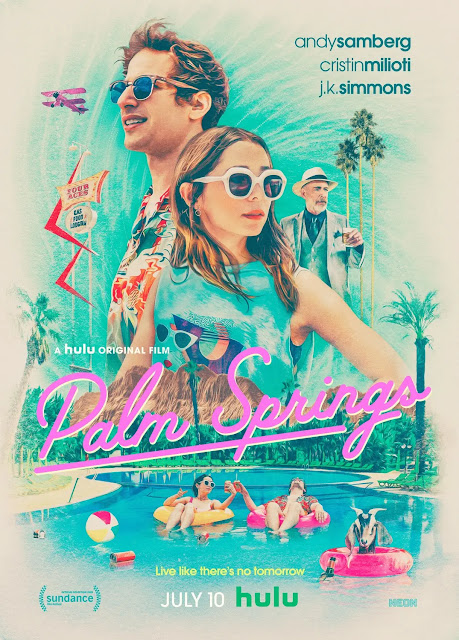 
Released under normal circumstances, Palm Springs (2020) would be a fine movie relying on a tried and true set-up, but with a few key twists to set itself apart.  In Pandemic Times, the movie has a resonance the producers never could have anticipated.  But here we are.

The film stars Andy Samberg playing Andy Samberg, Cristin Milloti playing LA's idea of an indie-film troubled cool-girl (and an Austinite, natch) and JK Simmons playing JK Simmons.  This isn't a criticism.  It doesn't exactly raise the bar on the movie, but because Samberg and Simmons are just charming as hell on screen and Milloti is extremely good at being a hip, non-specifically troubled woman, it all works.

Essentially lifting the premise of films like Groundhog Day, where our POV character is placed in a timeloop and is living the same day, over and over, the film finds new territory to expand into and basically assumes you've seen Groundhog Day so it doesn't need to answer a lot of those questions.

Samberg is our more doofus Bill Murray here, but we find him in media res.  He's been looping for so long, he has no idea how long he's been doing it.  Hooking up with Milloti, he's suddenly shot with arrows by a mysterious stranger, and to escape, disappears into a cave with a strange, glowing light, while telling Milloti not to follow him.  She does.

So, really, the spin is that Samberg has accidentally pulled two people into his personal hell, and by the time Milloti becomes part of it, they've done everything they can think to do in a day given the limitations of time and space.  They're trapped and bored and angry.  But it's a low boil angry, because... what are you gonna do?

Really, the movie - as all romantic comedies are - is about two people finding each other, losing each other, finding each other again, and moving on together.  If Bill Murray's repetitive courtship of Andie McDowell maybe plays a bit weird now, this is the opposite - as Samberg and Milloti work out all the stages of a movie-type relationship over the course of an infinite number of days that are all the same.

The comedy in the movie is all over the place, from deft character bits, to broad slip and falls, to surreal moments - and the movie definitely wants to feel a little otherworldy through its setting in what I understand to be an oasis in the deserts of California (as often happens, LA based movie makers kind of assume we'll all nod along knowingly about specific Southern California references or short-hand).  In general - at least for my sense of humor - it works.

I've not seen Milloti in much other than Fargo, but she's game.  As the LA Cool Girl, her role is to - again - be vaguely troubled and smarter than the men, and most of the women, in the movie (but not get along with the women) - and she does it very well.  JK Simmons is, as always, a delight.  And its fun having Peter Gallagher in there and character actress Dale Dickey.  TV's current Superman, Tyler Hoechlin plays the blandly handsome groom.  But we're all going to love the bartender, Daisy.  But everyone is pretty funny - but not overshadowing the focal characters.

As with many a-film, the good set-up requires resolution, and that's a bit unsatisfying here.  Groundhog Day already took their most movie-flavored escape route.  But, whatever.  It is what it is.  And it gets us from Point X to Point Z in the movie without belaboring the issue.

Mostly, though, as we sit here in our respective timeloops, as I said at the top, it's a timely reflection for how you're using your time and what are you doing with yourself?  And - what does it mean to go through this loop together?  It's unlikely you're quarantining with a Hollywood-attractive mystery girl or guy,  but you may be with someone.  Maybe, as is JK Simmons in this movie, with kids and a wife you may feel have lost some of their shine.

You can use that time to be begrudgingly stuck with someone, or you can appreciate the opportunity that this unreal time provides.


*at one point, Genesis was an art rock band, and even when they were putting out the biggest album in the world, there were some tracks that were left over from those days.  Also, check out Domino 1 & 2 from the same album.

I have to admit to being a bit unnerved in retrospect by how much I was nodding along in agreement with the most nihilistic bits of dialogue.

In retrospect, maybe I *should* have been unnerved that I was nodding along?