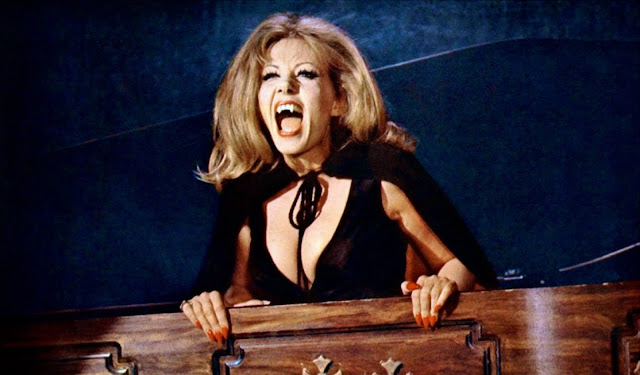 Watched:  10/23/2020
Format:  Amazon Streaming Watch Party
Viewing:  Second
Decade:  1970's
Director:  Peter Duffell
Really, an excuse for me to watch an Ingrid Pitt movie, I subjected friends to The House That Dripped Blood (1971), a horror anthology starring Christopher Lee, Peter Cushing, Denholm Elliot and, of course, Ingrid Pitt, all in different sequences.
The budget is modest, but it does have a sort of fun "let's tell spooky stories over the campfire" vibe to it, with four episodes of horror, all in complete different genres.  One - a writer conjures the villain from his book to life.  Two - a retired actor stumbles upon a wax figurine in a wax works in the village that reminds him of a woman with whom he failed to kindle a relationship, and he becomes obsessed.  Third - a man moves into the house with his young daughter, who may be a bit too much like her deceased mother.  Fourth - a horror movie star and his much younger girlfriend/ co-star move into the house while he also secures a cape that may really, really get him into the role of a vampire.
It is a silly movie, in many ways, but a darn good one for the Halloween season.
Posted by The League at 10/26/2020 02:57:00 PM