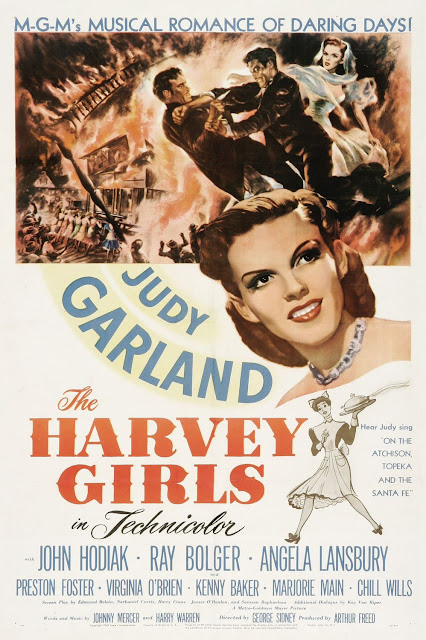 Watched:  06/21/2021
Format:  TCM on DVR
Viewing:  First
Decade:  1940's
Director:  George Sidney
So, I recorded this one as part of the Cyd Charisse "Star of the Month" retrospective on TCM, and while I have been waiting for the AC repair guy to call me back (it's 100 today in Austin), I put the movie on.
I'd always heard the name of the film The Harvey Girls (1946), but didn't know anything about the movie - just that it was a big, 1940's-style musical with Judy Garland as the lead.  I assumed it was about a group of sisters in the Harvey family.  Nope.
Apparently it is historically true that part of the settling of the west was the deployment of a/ the first franchise of restaurants,  established by a guy named "Fred Harvey".  He built restaurants at various train stations and depots across the west.  He hired young women from across the country to come serve in the restaurants.  He was looking for well-mannered, mid-Western and Eastern girls who were willing to have an adventure, starting in 1870 in Kansas and spreading out along the train lines into Arizona and California.
The film takes place in the 1880's.  Judy Garland is *not* a Harvey Girl, but has answered a newspaper-placed request for marriage, finding the gentlemen of Ohio not to her liking.  Arriving in a dusty desert town, she realizes she's kind of the butt-end of a joke by John Hodiak who wrote letters for Chill Wills.  Garland and Wills decide not to marry immediately, but now she has to figure out what to do, and she falls in with the Harvey Girls.
Across the street is a classic western town saloon, run by young Angela Lansbury, who will make a generation of people who grew up on matronly Angela Lansbury go "huh..."
Anyway, the Harvey Girls and Garland kind of look down their noses at the show girls and want to elevate the decent folk in town, and they seem wildly tiresome.  As a person living in a gentrified city, I'm firmly on Lansbury's side.  Like, we were having fun and had a good thing going, and then a bunch of nerds showed up and ruined it by insisting they just replicate what they were doing out East that they were supposedly getting away from moving to a cool city.
Hodiak actually does want to make something out of his little patch o' desert, and he and Garland are flirty and whatnot.
The film has three musical sequences worth mentioning
1)  There's a 10 minute number at the beginning where the Harvey Girls explain themselves, but it's actually not bad!
2)  Cyd Charisse does have a lovely dance number
3)  Ray "The Scarecrow" Bolger has a lengthy number
Also - there's an all-ladies bar-room brawl.
In general, the movie is light, frothy fun.  But it's also celebrating a bunch of kill-joys coming to town and shaming the saloon girls, and literally only realizing they're not so different, you and I, AFTER they've run them out of town.  That's garbage, movie.  Garbage.
Posted by The League at 6/21/2021 07:48:00 PM