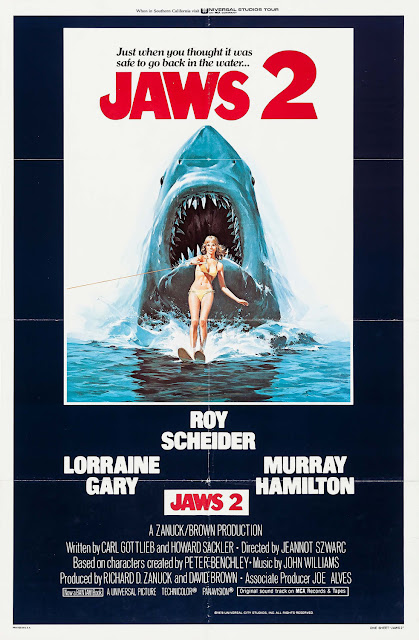 Watched:  06/21/2021
Format:  Amazon Streaming
Viewing: First
Decade:  1970's
Director:  Jeannot Szwarc
I've seen the original Jaws probably 20 times, but as part of my day waiting for the AC repairman, and as yesterday was the 46th anniversary of the release of Jaws, I figured... maybe give that sequel a spin?
Jaws 2 (1978) arrived 3 years after the original, and had some of the band still in place.  Scheider and Lorraine Gary reprised their roles, as well as Murray Hamilton as Mayor Vaughn, our canary in the coal mine that politicians don't actually have to worry about disasters or deaths they cause through incompetence so long as people refuse to ever admit maybe the voted for the wrong person.
Screenwriter Carl Gottlieb is back, as well as the same producers David Brown and Richard Zanuck.  Even John Williams.
But, yeah, it's not Spielberg.  Instead we got Jeannot Szwarc, who you may say:  what else did he do?
Well, for one, the 1980's Supergirl movie.  But also Somewhere in Time.
I'm glad to say, this movie isn't bad.  It doesn't embarrass itself and detract from the original.  It just isn't the original.  Some foods you can eat the leftovers and they're fine the next day, and other things just don't stand a re-heat.  This is fine.  Even pretty good.  Everyone remains fairly true to character, but this is when I point out:  back in the day, a sequel to a movie was often a repeat of the first one with new circumstances.  This is a pre-Empire Strikes Back sequel, so folks weren't as clued into the notion that things have to move on, and often get bigger in scope.
Roy Scheider is the once again the one who thinks it's a shark, but once again, the mayor doesn't want to hear it (this time it's a real estate deal).  Lorraine Gary may be working for the developer, but she's also mostly there to comfort other characters.
The shark *mostly* looks more convincing than Bruce, but the confidence they had in their big, rubber shark doesn't necessarily serve them well, as one popular take-away from seeing Jaws is "less is more".*  They definitely have the jowl problem solved, but then they slam the shark into things and it's clearly a big, rubber shark that's all wobbly, including in the titular jaws.
One very weird bit of the movie is that I couldn't keep track of who was who in a pack of teenagers who make-up our object of concern for the final reel.  I don't know how many blonde, straight-haired white girls they had on that flotilla.  Never figured it out.  And by my count, there were at least three guys with the same hair, build and look, and I never knew who was who.  They also want us deeply invested in a girl who is just visiting the island, but never tell us anything more than her name at the beginning of the movie.  But the camera just hangs on her.  It's weird.
Scheider is doing his best to turn this into a redemption story of sorts for Chief Brody, and I think it mostly works.  We see come character growth as well as some PTSD from the prior film, but his actions in the third reel speak from the place of a guy trying to save his son from the horror he got through in the first movie.
Anyway - don't move to Amity Island.  The local leaders there are morons.
*this rule works til it doesn't.  I can't tell you the alchemy here.  I'm fine with not seeing Godzilla show up for a bit in the 1954 film.  In the 2014 American version, it feels like they're just refusing to look up.  And that feels kind of dumb.
Posted by The League at 6/22/2021 01:17:00 AM