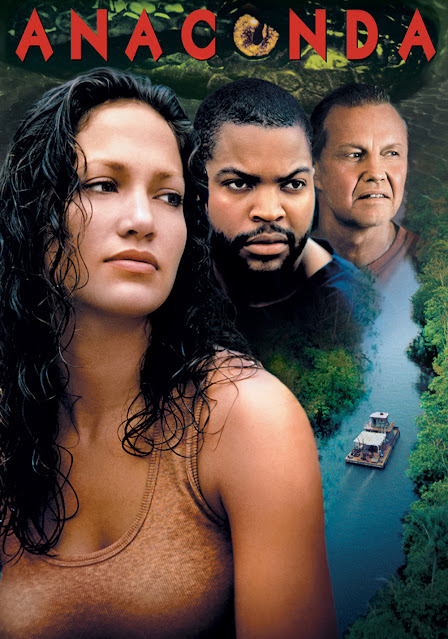 In 1997, the Bros. Steans + Jamie were big fans of talking each other into going to see whatever goofiness was at Ye Olde Cineplex.  This movie fell squarely into the sort of thing we were constantly convincing ourselves we needed to see.
When someone said Ice Cube and Jon Voight are in a movie with a giant snake, you could sort of see a Ryan-shaped cloud where I once had sat as I sped myself to the movie theatre.
And, yes, I was aware of Jennifer Lopez at the time, and I did not cry that she was in a lead role.
Anyway - it is a simple movie about a riverboat full of people and the giant snake which eats them.  That's it.  That's the plot.
Starring:  Jon Voight! J.Lo!  Eric Stoltz! Ice Cube! Owen "prefame" Wilson! Kari Wuhrer!  Danny Trejo!  and nerd favorite voice actor Frank Welker as the anaconda!  I'm not kidding!
Join us!
DAY:  Friday - September 10th
TIME:  8:30 Central/ 6:30 Pacific
FORMAT:  Amazon Watch Party
COST:  $4
LINK HERE TO WATCH
Posted by The League at 9/07/2021 06:10:00 PM

I would watch this movie again just for Jon Voight's accent.

I remember it feeling completely bonkers