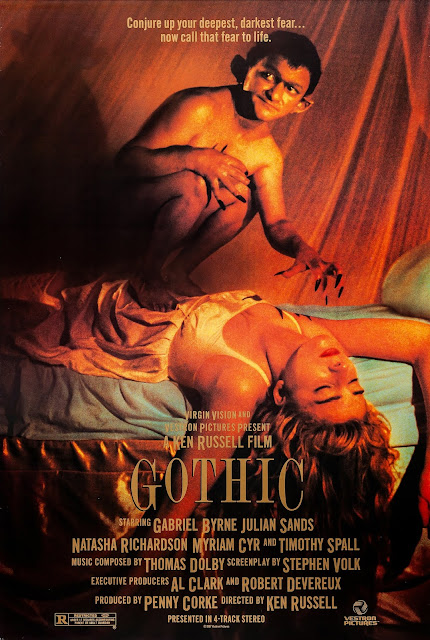 Watched:  10/16/2021
Format:  Amazon
Viewing:  First
Decade: 1980's
Director:  Ken Russell
Gothic (1986) is one of those movies I remember always seeing on the shelf at movie rental places.  It was always in, but I never pulled the trigger and watched it.  I'm thinking the copy on the box describing the movie was not great, because - I believe - had it been more accurate, I would have rented the movie.
Based loosely on some real-life events (and then deeply fictionalized), the movie imagines about 24 hours of drug-fueled shenanigans in a mansion in Geneva at the turn of the 18th to the 19th Century as Percy Shelley, Mary Godwin (soon to be Mary Shelley) and Mary's step-sister arrive to have a hang with the notorious libertine, Lord Byron - in self-exile from England.
If you ever want confirmation that your life could be 100x more exciting and 1000x more troublesome, read the wikipedia pages on the real-life Percy Shelley and Lord Byron.  Those guys lived hard, played hard, died hard and could not keep it in their pants - the Rat Pack of their day.  Except they both wound up dead before they were 40.
The cast includes (and why I pulled the trigger now) Julian Sands as Shelley, Gabriel Byrne as Byron, Natasha Richardson as Mary Godwin and relative unknown Myriam Cyr as Claire.  Add in a soundtrack by Thomas Dolby(!), and Russell directing and it seemed worth a look.
I don't know that much about laudanum, but gulping down morphine AND booze tells me that being upper crust in the 19th Century was batshit.  And this movie is somewhat like watching a bunch of people in college having a particularly rough night when things go sideways.  It's Ken Russell, so it's a weird mix of "this is awkward and preposterous" and "I cannot look away".  Plus, I'm not sure that Shelley and Byron weren't awkward and preposterous to modern eyes, kind of like how you can't figure out how that guy with the terrible facial hair is the one all the ladies went gaga over.
Here's the real life deal:  there was a contest among the gathered group to come up with some solid ghost stories.  Due to volcanic activity, there was basically no summer that year, and many terrible storms.  This was enough to inspire Mary Godwin (eventually Mary Shelley) to write Frankenstein.  Another guest, Dr. Polidori, adapted a story told by Byron that became "The Vampyre", a work generally considered one of the (if not the) first work of vampire fiction as we know it.  There was no story involving Abbott and/or Costello.
But, yeah, there's a lot of allusion to Frankenstein and Dracula type stuff, but done just right so that we're never really sure what's happening.  Tripping balls and freaking each other out while the personal issues of the characters bubble at the surface is an interesting way to spend a movie.  Depending on how you want to count them, there really aren't special effects - just practical and lighting effects, a few bits of make-up here and there.  And some neat ideas for editing and camera.
Anyhoo, it was a very good Halloween selection in a lot of ways, but probably not everyone's cup of tea.
Posted by The League at 10/16/2021 12:48:00 PM