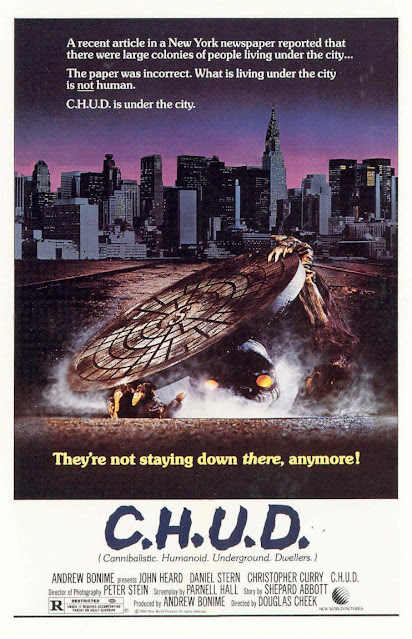 Watching CHUD for the first time. A thread.

It's a not-great film that doesn't understand how cheap horror movies are supposed to work, or movies in general, and is weirdly pretentious.  Which, frankly, if you told me yesterday that CHUD (1984) has lots of scenes that feel like they're improvised by a couple of actors who've been taking a lot of classes, and it will all be treated with deadly seriousness: I would not have believed you.  But here we are.
All of that stuff, by the way, is fine:  if any of it lands.  Or the movie is earning it.  Or the writing doesn't get away from the movie.  But at the end of the day, this is a movie about Morlocks eating people, and for some reason we spend 1/3rd of the movie in an unrelated story about John Heard's career and his relationship.  None of which is CHUD-related.  Or particularly good.
By far the weirdest are the extended scenes between Daniel Stern and Christopher Curry, where both are intent on playing unhinged and angry.  And the scenes just. keep. happening.  Both in length and frequency.
In theory the movie is about NYC having a problem with Carnivorous Humanoid Underground Dwellers, but it's also about a soup kitchen, the plight of the homeless, a career change that's really impacting a marriage that might be on the rocks, and a cop who seems really stressed out because his wife disappeared, but he fails to mention this as a problem until the second half of the film.
Also, the willing belief that nuclear waste was disposed of beneath NYC when it would literally be easier to put it on a boat and float it out 20 miles and dump it.
Maybe the WEIRDEST moment of the movie was when we saw a scene that I now believe James Cameron must have ripped off for Aliens where people with flamethrowers go down into the tunnels with a video camera  while their bosses watch them on monitors.  That's gonna sit with me a while.
Posted by The League at 10/10/2021 01:34:00 AM