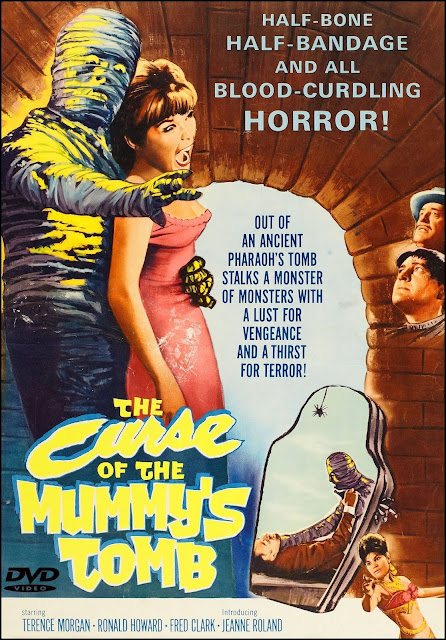 Watched:  10/09/2021
Format:  BluRay
Viewing:  First
Decade:  1960's
Director:  Michael Carreras
Hammer Horror!  That eventually gets scary!  If you really wait.
This first Mummy movie from Hammer is awesome, and so I figured even a xerox of a xerox would be fine.  And, it is.
Mummy is dug up, Egyptians are actually okay with it  - sort of - except for killing the one British guy.  But then a big, dumb American showman (Fred Clark, who was in *everything* for like 20 years) decides that instead of taking it to the British Museum, they should take it on the road.
Anyway, there's a whole lot of plot, and the leading lady seems like she's written by someone who really had some trouble with their last girlfriend, taking the usual 1960's Hammer misogyny to cool new levels.  The reason the Mummy shows up and the motivation of those bringing him back is all-new.  But we do get some decent Mummy-Terminator action.
For once, the Egyptians are given the benefit of the doubt - they're not the ones setting things in motion - at least not the official Egyptian government.  They're not thrilled Fred Clark is going to tour their dead pharaoh around Wisconsin, but aside from that...
Anyhoo.  It's fine.  It's not my favorite, but it was a fun Hammer watch.
Posted by The League at 10/10/2021 12:27:00 AM