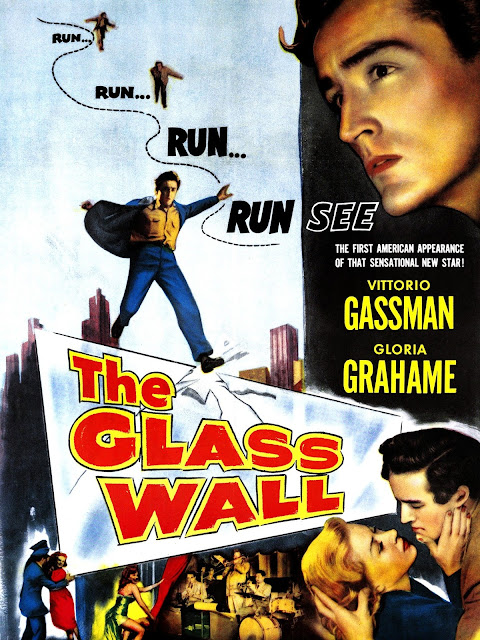 Watched:  10/09/2021
Format:  TCM on DVR
Viewing:  First
Decade:  1950's
Director:  Maxwell Shane
I dunno if this is actually Film Noir.  It sure didn't feel like it, but Eddie showed it and brought Dana Delaney along, so who am I to argue?
The Glass Wall (1953) was a contemporary issue movie in 1953, but one that echoes in the events of today.  A Hungarian WWII camp survivor and resistance fighter has stowed away on a ship and arrived in New York.  But with no papers, he's set to be turned away and returned to Europe where he is fairly certain he will be killed.
Any of this ringing a bell?
He's stowed away under the notion that if he can find an American he saved and hid for days in a haystack, that man will support his entry to the US.  But all he knows is a first name and that he plays the coronet.  So - he makes good his escape, pursued by the law, walking through the streets of New York.
Also starring Gloria Grahame in a surprisingly small role for her at the time.  But after Bold and the Beautiful, Grahame knew she'd been good in earthier roles like in Crossfire, and so appears as a factory worker, down on her luck and knocked around by life.  (She also steals the coat of an impossibly young Kathleen Freeman, who makes a federal case out of it eve though she gets her coat back).
Less familiar will be the stripper with a heart of hold, played by Robin Raymond - a very Americanized Hungarian transplant living with her less-adjusted mother and deeply American brother (Joe Turkel!*).  It's a great part of the film I hadn't seen coming, and rather than platitudes and Gloria Grahame looking amazing as a shop-worn girl who needs a pal - typical movie stuff - it's a look at the multiple angles of the immigrants here in the US.  And, man, in one of those shining moments of film, it feels *true*.
In this era of dismissing the UN as useless, it's also a time capsule of what the UN was supposed to be, and what it represented to the world in the wake of the atrocities and devastation of WWII.  And as quickly as it's established, we can see how useless an empty UN is - maybe something not intended in the way you can see it now, but certainly how it was meant at the time.
Star Vittorio Gassman is exactly what the film needed - a handsome face that could look desperate.  The film wasn't shot entirely on backlots.  There's some real footage of Gassman on the streets of 1953 NYC including Times Square.  It's chaotic and dark, lit with neon.  As Gassman looks for his friend, the loneliness and alienation are stunning.
The movie also features Ann Robinson from War of the Worlds and a handful of character actors, as well as real jazz musicians like Jack Teagarden and Shorty Rogers.
The movie isn't great, but I have a feeling - because of it's period messages reverberating to today - I'll remember it.
*ah, you know him from Blade Runner and The Shining.
Posted by The League at 10/11/2021 01:24:00 AM