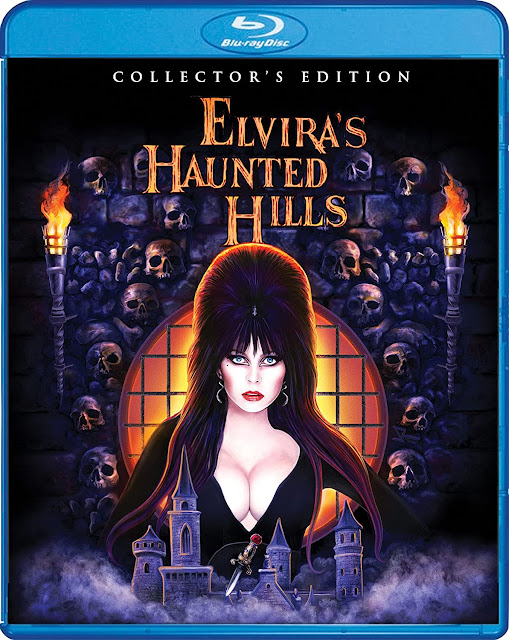 Watched:  10/10/2021
Format:  BluRay
Viewing:  Second?  third?
Decade:  00's
Director:  Sam Irvin
This movie is a curiosity on so many levels, the mere fact of its existence tends to overwhelm the actual content of the film.
Elvira was a pop culture phenomenon back in the 1980's, but it's probably fair to say that the 1990's weren't as good to her.  After the commercial failure (but, I think I can say, comedic success) of Elvira: Mistress of the Dark in 1987, big media interest in Elvira waned.  Back then, that was it.  You basically got your shot, and the idea of revivals wasn't huge at the time.  The roaring return of Elvira as a talk-show staple, baking show staple and general presence and gadfly in the universe is mostly due, I think, to people who liked Elvira and had access to the internet.
But in 2001, we were just barely getting past GeoCities and convincing our parents that getting a computer was actually something they needed to do.  I had dial-up.  It was a different time.
The 1993 attempt at an Elvira sitcom had fizzled (and, frankly, I DO NOT GET HOW.  The pilot is as good or better than 90% of what was on TV at the time, and came loaded with Elvira), so the Hail Mary of the moment was Cassandra Peterson and John Paragon writing a movie, self-funding it, and then grabbing a bunch of people and heading to Romania to film.
I vaguely remember the movie went straight to DVD, and I think my copy is from that initial pressing.  But there's a new BluRay edition, and that's what I watched.
The movie basically takes the shape of an API/ Roger Corman movie from the Vincent Price era, but, you know, drop Elvira into it.  Really, this could work for any genre, especially horror.  I can see her rhumbaing past Michael Meyers or trapped in the Overlook for the winter, driving Jack crazy(er).  But I think Pit and the Pendulum type horror was also a pretty darn good fit.
You're either on board with Elvira's brand of humor or not.  Much like Elvira: Mistress of the Dark, this movie also gets funnier as it progresses, which is usually the opposite of how comedies work - eventually they have to tell a story and so they lose a lot of steam and usually go for a schmaltzy lesson.  But this movie in particular has no lessons to share, except maybe to not strange carriage rides.  So, there's a lot of room for gags to just keep growing.
I can't guarantee it's everyone's bag of tricks, but I'm here for it.
The budget was clearly... low.  I mean, they say in the bonus features that they went to Romania (in probably 1999 or so) to get more bang for their buck.  And it works, anyway, as a natural backdrop for the story.  The set is...  well, it's API film ready.  But is apparently the set from High Spirits, which I've never seen.  But does explain how they could afford such a big set.
And the cast is a weird ensemble.  Richard O'Brien from Rocky Horror.  Mary Scheer from a bunch of stuff, but I saw first on MadTV.  Scott Atkinson (doing some great over the top Brit accents) from like 50 different things.  Heather Hopper who was in that first season of Saved By the Bell.  And Mary Jo Smith in the thankless role of ZouZou.
Director Sam Irvin has gone on to do a lot of Hallmark movies - a few of which I have definitely seen.
Look, I have affection for this movie, but it's not Citizen Kane.  I love that Cassandra Peterson bet on herself, and that this movie is out there - and that it is *very* Elvira.  Complete with a full song and dance number.  The energy she and the cast put into the movie is pretty darn good, maybe even especially when they know a gag is a groaner.
The disc comes loaded with features - plus an all-new intro by the hostess with the mostest.
Posted by The League at 10/10/2021 05:39:00 PM