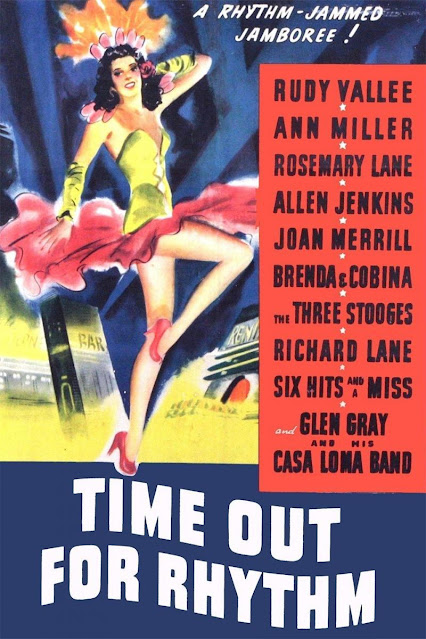 Watched:  11/06/2021
Format:  TCM
Viewing:  First
Decade:  1940's
Director:  Sidney Salkow
My feeling is that they didn't make movies like this much post WWII.  It's a movie, yeah, but it's a musical/ vaudeville/ what-have-you revue.  It's got a basic framework, and that framework is not that of a musical where songs and bits are part of the story.  Here - the story stops as characters perform for one another.
The basic premise is that a top Broadway performer drops her manager, so her manager teams up with Rudy Vallee and they become successful agents and promoters.  But then the original manager hears his former talent is getting divorced and available to sing/ play snuggle-bunnies, and he decides to throw everything out the window to work with her.  Meanwhile, Vallee discovers a still teen-aged Ann Miller as her maid, basically being Ann Miller, and decides to run with it.
We also get a fairly early appearance from a Shemp-less Three Stooges, Joan Merrill, Brenda & Cobina, Rosemary Lane of the Lane Sisters, and more.
Basically, it's as easy to watch as it is to drink a glass of Coke.  You may not be nuts about it, but you'll suddenly realize you're at the end of it and shrug.  It's cute and funny-ish, and only has a few problematic bits left over from days of yore.
Honestly, I watched it like 24 hours ago and had already forgotten about it, so.  I mean, Ann Miller was still very young and just signed to Columbia, so they barely let her speak.  As an Ann Miller movies I'd not previously seen, I'm glad I can check it off, but it's more of an interesting artifact than anything I'd need to own in 4K.
Posted by The League at 11/07/2021 05:34:00 PM