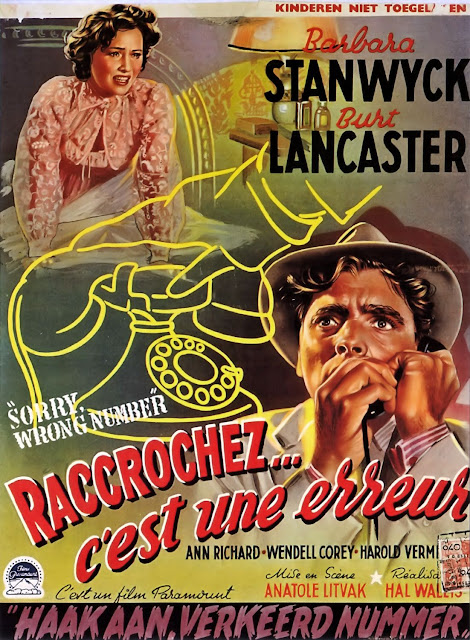 Watched:  11/09/2021
Format:  Amazon Watch Party (Jenifer pick)
Viewing:  First
Decade:  1940's
Director:  Anatole Litvak
I had never seen this film, but Jenifer chose it for a Noirvember Watch Party, and it had Stanwyck, so I wasn't going to dodge.
Based on what seems to have been a very popular radio play, Sorry, Wrong Number (1948) is deep into noir-thriller territory, and achieves its goals totally differently, but just as effectively (or more so) as Beware, My Lovely or Sudden Fear.
Stanwyck plays an invalid rich girl who hears a conversation over crossed wires (this used to actually happen, kids.  I remember getting pulled into other people's phone calls by accident as late as high school in the 1990's) wherein the two participants are planning a murder or an unsuspecting woman.  Stanwyck is bed-bound, and her husband hasn't come home, so it's through a series of phone calls and flashbacks that we put together her background and what's going on with her husband and her.
It is SUPER complicated, but has to do with her being a bit unfeeling towards Lancaster and treating him like a kept man, and him trying to break out.
It's a great cast, including Ed Begley Sr., Ann Richards and Wendell Corey.  It might be crazy to see a movie almost entirely in flashback to the point where flashbacks contain flashbacks, but the conceit works as Stanwyck gets more and more... disturbed.
It's an interesting film in that there isn't anyone who is a hero, but we do have a protagonist in Stanwyck.  Still, she's not exactly Little Mary Sunshine, and almost everyone has an angle as the story unfolds.  I'll agree it's noir more or less from that set-up, but by the end, it's gone so far into thriller territory, it almost spills into horror.
SPOILERS
Look, the ending was a total @#$%ing shock.  I can very much see how this played to radio audiences, but to actually have a sequence in a film where a killer stalks and actually does murder a woman just out of frame was kind of terrifying.  You don't see that in movies of the era, and especially to main characters.  And doubly especially to Stanwyck - but she knew how to pick a role, man.
All in all, I actually liked this one quite a bit.  It's got a lot of overhead in all the flashbacks, and it's a bit rough with so many characters, and not one who seems particularly like someone you'd want to spend much time with outside of a movie screen, but it's got a certain unique flair.
Posted by The League at 11/11/2021 12:14:00 AM