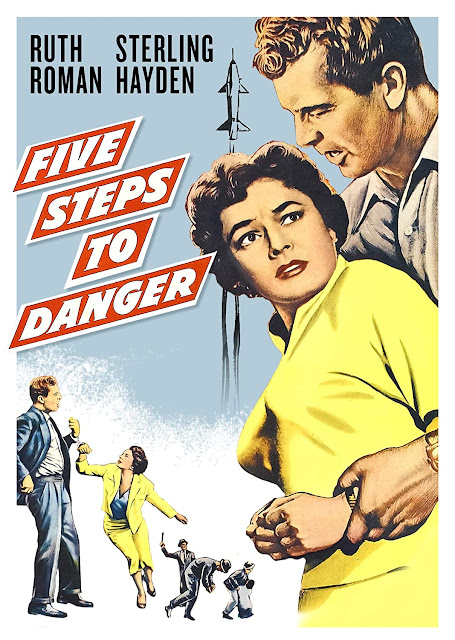 Watched:  11/10/2021
Format:  Noir Alley
Viewing:  First
Decade:  1950's
Director:  Henry S. Keslar
There's both too much and not enough going on this post-war roadtrip noir - that is barely a noir.  But it does star Sterling Hayden as a guy in a hat, and Ruth Roman as a dame in trouble who pulls Hayden in over his head.
I hesitate to get into this plot-dense noir with a synopsis, because the plot isn't exactly nonsense, but how they go about it is a mess.   But the basic gist is that Hayden's car breaks down en route from LA to Texas somewhere, and Ruth Roman offers him a ride if he can help her split the drive to Santa Fe so they can keep moving.
A mysterious nurse approached Hayden in a roadside stop and says they've been following Ruth Roman as she's an escaped mental patient or some such, but for some reason, they're just watching her? But, basically, it's a sinister spy story of former Nazis in the US (one played by Colonel Klink) trying to get ahold of some info Roman came into possession of whilst in Germany trying to get her brother out of East Germany (I think).  People keep trying to convince Hayden Roman is crazy - but she clearly isn't.  So.
Anyway, Hayden probably hated this script.  His character is kind of boring and always right about everything (which is not where Hayden shines), and Roman is fine, but a little dull here.  As is the movie.
I did not love it.  I couldn't figure out why the CIA wasn't taking an active hand in the proceedings as so much was at stake and they were watching everything.  None of the movie's story really had much of a reason for happening.  I dunno.  I've seen worse, but this one was just kind of not my thing.  Except it's a ripoff in many ways of The 39 Steps, which I've only seen as a play, and I liked that.. so.
Posted by The League at 11/11/2021 12:59:00 AM