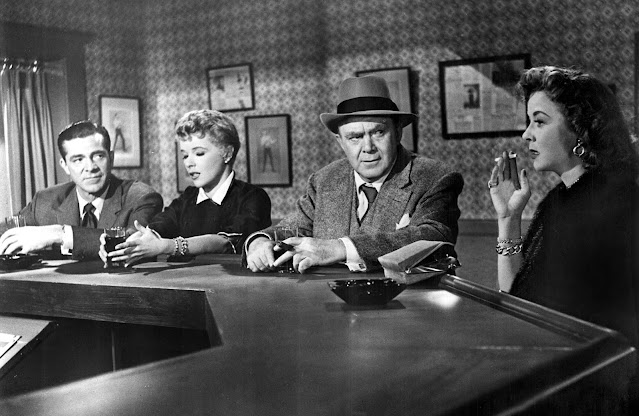 Watched:  07/20/2022
Format:  BluRay
Viewing:  4th?  5th?
Director:  Fritz Lang
I've written this movie up multiple times.  I really like it, and I like it more every time I watch it.
It's a newsroom film from mid-Century America, with shades of noir - but the cast in this movie is unreal and worth checking out, and it's the last, great Fritz Lang film.
Here's who you have in the film:
Dana Andrews, Vincent Price, George Sanders, Rhonda Fleming, Thomas Mitchell, John Drew Barrymore, Sally Forrest and...  Ida Lupino.
I mean, it's worth the price of admission just for the cast and director, but I dig the hell out of this movie.
It's a workplace dramady, a hard-nosed newspaper/ media film, a suspense-thriller and absolutely an ensemble piece.  It moves at a newspaper movie clip, and you have to pay a bit of attention to keep up.  But if you do - the workplace drama is phenomenal, and while a fascinating look at "juvenile delinquency" as seen through the lens of the 1950's - complete with blaming *comic books* for driving a young man to murder.
If you're looking for how one keeps sex and shenanigans just off screen in a Hayes Code era movie, this one is a lulu.  And despite Rhonda Fleming performing calisthenics, Ida Lupino is the thing you'll keep your eyes on through the whole film.
This was Jamie's first viewing, and she spoke up afterwards about how great Lupino's character and performance were as a nuanced character with her own agenda.  I'm in complete agreement.  Lupino takes what's on the page, which could have been words given to anyone, and absolutely elevates the role as smart, conniving, amoral and sexy as hell.
She also drinks champagne with a peach in it, and I need to look up what the actual hell is happening there.
Anyway - this is becoming one of my favorite films.  Just a good watch every time. 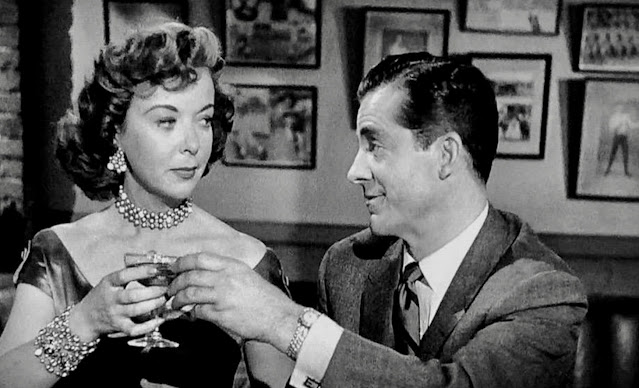