I sort of missed out on horror movies growing up, and I have only vague recollections of watching the original Piranha on VHS circa 1982 or so at a friend's house. As near as I can recall, people were attacked by, and eaten by, small fish.

The movie didn't leave much of an impact on me, and despite having an absolutely amazing cover to the VHS box, I never saw Piranha 2: The Spawning. 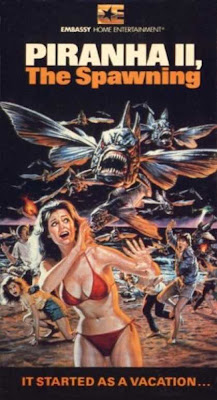 Yes, they are flying. And, no, I can't really get my head around how many great ideas are going on here.

It should be noted that Piranha 2: The Spawning was Avatar creator James Cameron's second directorial effort.

I have no idea how much Piranha 3D has in common with its forebears, but SimonUK - master of anything with beheadings - indicated to me after the movie that it gave several nods to the original. And as there are only so many things that can really occur in a story in which fish surprise and then eat people, I assume the plots are largely similar. 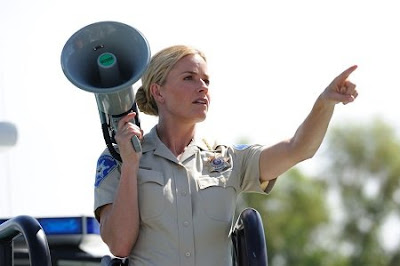 This movie features the my-she's-held-up-remarkably-well Elizabeth Shue, she of Adventures in Babysitting and Adventures in Nicholas Cage Sitting (aka: Leaving Las Vegas) fame. Shue doesn't act much these days, and I think she lives in Arizona, which is where our story takes place.

Lake Havasu is not terribly well known to folks east of New Mexico, but as a reference point for us Texans, its sort of the South Padre of the Arizona/ California region, where college kids on Spring Break go to booze it up on the water. The movie fictionalizes Havasu as "Lake Victoria", but its pretty clear exactly where the action takes place.

In case it matters: an earthquake opens a pathway to an underground lake, sealed off from the outside world for millions of years, where our beasties have been eating presumably each other, becoming super-jerk fish.

But, of course, none of that is as important to the movie as 3D blood-splattered mayhem once the fish discover people, which happens before the credits, you'll be happy to know.

This is a horror movie that isn't going to pull any punches with the gore even though you half expect the actors to do a take to the camera during a few scenes. Its comedy by familiarity with the genre, with characters established for the sole purpose of a bloody comeuppance, and knowing underwater POV shots, letting you know pretty much anyone with a toe in the water is going to get it.

Its also a surprising return to heaps and heaps of nudity in a horror movie, which was more or less part and parcel of the genre during its heyday (and there is a whole genre of water borne horror + boobs). Anyhow, the movie does not forget its in 3D at any point, and there's at least one swimming scene where you can almost hear the gears working in the director's head. again, in 3D. Yes, this is a still from the movie. There's a whole lot of this in the movie.

As an added bonus, it seems like pretty much everyone that director Alexandre Aja called up to participate had nothing going on that weekend, because the movie has a curiously great couple of cameos and a remarkable supporting cast. In addition to the lovely Ms. Shue, there's also Ving Rhames, Jerry O'Connell, and more. But the cameos by Christopher Lloyd and Richard Dreyfus are just gold. 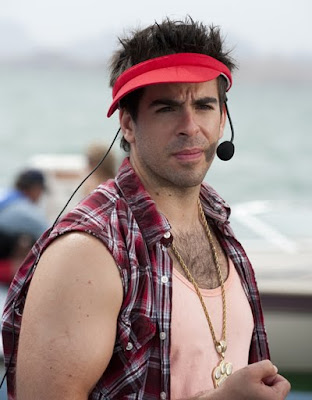 as Jason pointed out, once Eli Roth showed up as a party promoter, we all knew exactly how awful things were about to get for the Spring Breakers.

At any rate, if you're looking for a capital S "Summer Movie" relishing old school plot with a wink and a nod, you could do far worse than Piranha 3D.

This reminds me of the time I stayed at your house, and your mom rented Ninja 3: The Domination for me. Boy, that was a stinker.

Yeah, I still thought Elizabeth Shue was better looking than the women in all of those bikin (and partial bikini) shots. She has magic hotness powers.

Is this the Matt A. from Loring Drive? Because if it is, I have a hard time believing you really didn't like Ninja 3: The Domination. You loved ninjas.

Yes, yes it is. I loved ninjas, yes, and at the time I loved that movie. But I confess that I tried watching more than 5 minutes of that film recently, and failed miserably.

I admit, I've also tried to watch the movie again, and found it... challenging.

Also, good to hear from you!

Thanks - good to hear from you too. I just found your blog the other day.

Well, continued reading of the blog guarantees you will soon be 10% dumber. Welcome!

Hope your family is doing well.

Thank you. My wife and daughter (starting 2nd grade already) are well, as are my parents. My brother... not so much; he's getting by, but struggling against mental illness. So it goes.

Ah. Sorry to hear about your brother.

My folks kind of have one foot back in Austin, and plan to retire here somewhere in the not-too-distant future.

Hope the school year starts off well for the whole family!