I don't really know what to say about True Grit.  I assume many of you have seen the movie at this point. 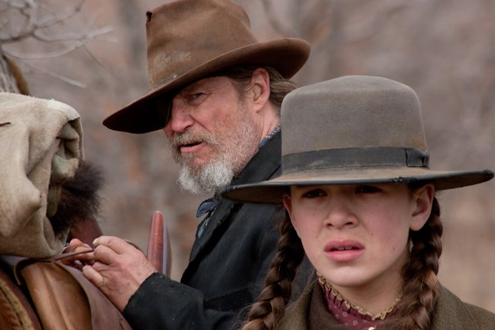 I was very pleased with the stylized dialog (which I took as the mannered retelling of Mattie's tale, to some extent), which the actors all handled remarkably well.

The past few years Jeff Bridges seems to have moved from all-purpose leading man to top-flight actor in the public esteem (he was always good, and I don't dispute this), and here he seems to really earn it as Rooster Cogburn.  And if you've been watching Matt Damon the past few years, I don't think its any surprise that he's really very good as LeBoef, the flashy Texas Ranger in search of the same man as our unlikely duo.  As Mattie Ross, young actor Hailee Steinfeld really does go toe to toe with both Damon and Bridges, and no doubt we'll see her again, hopefully not moving into the typical fare offered up to young women in Hollywood.  With a Coen Bros. pedigree, I assume she can continue to find A-List work, but we'll see (I weep for young Dakota Fanning blankly wandering through scenes in the Twilight series).

The story isn't anything that new or innovative (but may appear so to film viewers in 2010 who rarely touch Westerns).  What's striking is that the Coens so deftly move from a film like A Serious Man (which I really need to rewatch now that its on HBO), to a remake of a legendary piece of genre film and manage to put their stamp on it while staying within the confines of the Western.

Brolin's part is perhaps smaller than you would guess, he being Josh Brolin and all, but he leaves an impression, and I loved how the role was scripted.  Add in the best use of Barry Pepper I think I've seen, and the supporting cast gets a nod, too.

I could have gladly stayed with the characters and story for an additional half-hour, had the story sprawled a bit more.  And when was the last time you weren't doing mental calculus based upon where you knew you had to be in the plot, versus how long you were going to have to sit there?  I had a theater director once tell me that he knew a play was good if he didn't check his watch, and at no point, was that what I was doing.

Unlike at least one of our Corpsmen (Nathan C.), I am not a film score aficionado.  But I had no doubt I was hearing Carter Burwell's work about 1/4 way into the movie.  I like Burwell's work, and its always good to see him working again with the Coens.

Yeah, I was really impressed at the way the C. Bros. managed to pull off what was essentially a straightforward, fairly old fashioned, character-driven western. In particular, I thought the acting was really, really strong (it's amazing to think about the different types of roles that Jeff Bridges has pulled off in an utterly convincing fashion).
Also, I want one of those bear hats.