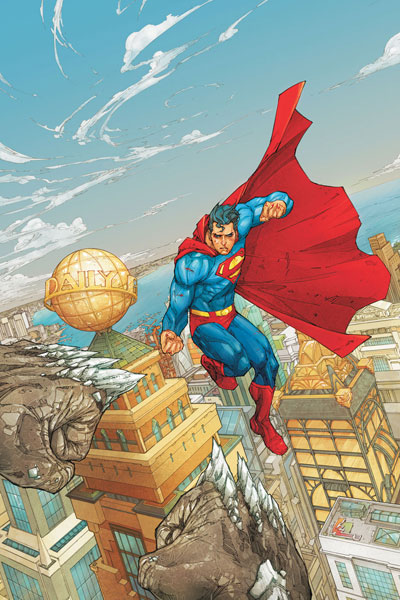 I've become a regular reader over at The Kryptonian and he recently spotlighted the Reign of the Doomsdays story ongoing in Action Comics after it originated across several other titles.  I think he's right that, despite the fact we're seeing a reboot of the Superman titles in short order, this is actually turning lemons into lemonade and giving us a fun, strong Superman story taking us right up to the final days of the longest running American comic series (I still can't believe they're renumbering Action).

This issue continues the storyline, upping the ante (once again) and bringing the action, probably for ill, headed directly for Metropolis on the Moebius Strip Space Ark (filled with custom Doomsday clones because, as the kids say, "comics, everybody!"), threatening the very existence of the planet.

You kind of have to wonder if the powers that be weren't just bringing Superman home, but planning to bring Team Superman back together with Steel, Supergirl, Superboy, etc... in tow, had they not decided to "relaunch" the DCU.  Change is good, yadda yadda, but its also hard not to imagine what could have been on the Superman books under Idleson and Moss with Roberson and Cornell writing Superman books.

Cornell seems to get the "show, don't tell" rule of characterization, something that too many writers don't seem to know how to do when it comes to Superman.  Look, I don't think the world is going to end by the conclusion of the story (although, it sort of is, just not via Doomsday or crashing spaceships), but its in seeing Superman work with his team as a commander and prepare himself for the ultimate sacrifice simply brings the character back to life in a way he has only occasionally occurred over the past few years.

The introduction of the Doomslayer is a neat twist, and the motivations of the character.  Its just the same sort of clever stuff Cornell was able to bring to superhero books since he was brought onto Action.

I'm enjoying this storyline, and it leaves me with a bit of regret that Idleson and Moss weren't able to get their hands firmly on the wheel of the Superman books without what I suspect to be undue control from upstairs.

Its a fun read, but I confess, my frustration with the first part of the series is going to make it a tough collection to get through.
Posted by The League at 6/26/2011 11:24:00 PM

You make me want to read this. A lot.

Purchase with discretion. I'm enjoying this, but I can't guarantee everyone's satisfaction.