Let us just get this out of the way:  Lana Turner

Okay. I now feel prepared to move on.

About 12 years ago, I actually read the original James M. Cain novel of The Postman Always Rings Twice and liked it so much at the time I saw no real reason to watch the movie immediately afterward. Fortunately, I've pushed a lot of memories out of my brain in order to make room for stuff like Superman, name of my dogs' vet and Jamie's birthday, and I could no longer remember how the novel ended anymore.

I recorded the movie off TCM this week, and finally gave it a whirl.

The original novel was written by the same gentleman who wrote Mildred Pierce, so if you like soapy, melodramatic noir, I think this one is your ticket. Unfortunately, like Double Indemnity, the story has been lifted and repeated ad infinitum as the plot in other movies, to cop procedurals, etc... to the point that you have to guess that its now being duplicated by people who have no idea what source material they're lifting, and it also means that an audience 65 years on won't find themselves on the edge of their seat. 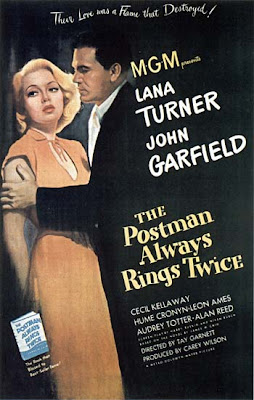 But as in many of these cases, there's a reason beyond the plot-points (and Lana Turner) that people have paid attention to Postman over the years.  Its a smart, sharp film, and the (melo)drama that plays out is sincere, even as you're watching the inevitable obsessions come into play and doom our leads.

John Garfield owns the role enough of vagabond Frank Chambers that its hard to imagine anyone else in his place.  Likeable but aimless, Frank clearly never had anything to tie him to anyone or any place, and his arc as a character is a wild dual role of striving to become a man that Turner's Cora Smith could love while making the worst decisions of his life in order to make loving her possible.

Cora married for money, too young at the time to know what real money looked like.  Her husband isn't a bad man, but its an ill-suited match, as he's hidden her in their road-side eatery and gas station where she's realized she won't ever find either love or riches.  And perhaps Frank isn't the right ticket out, but he's at least interesting.

If only they didn't have so many problems standing in their way.

The twists and turns of the fates and tangled emotions of Frank and Cora give them a level of sympathy that you never quite muster in Double Indemnity, or even The Prowler, and its part of what keeps you rooting for these crazy kids, maybe in the same weird way you also kind of root for Norman Bates, but that's something.

It wasn't until the final few minutes I realized I should have been paying more attention to the black and white switch of Cora's wardrobe.  While she remains a platinum blonde throughout, she does slip into black upon occasion, and I was curious if there was a pattern to what director Tay Garnett may have had in mind.

As per classics, it lives up to the hype, even if it feels a bit more chaste than you'd think, given how far these two characters seem willing to go.  I especially liked the interaction with the attorneys, and how the fate of the characters seems to slip right between their fingers without them ever really realizing what's going on.

Up against The Hustler, it feels a bit fluffy, but I won't dismiss the movie at all.  Of its sub-sub-genre of noir, its a a great entry, and completely watchable.