So, I finally watched The Hustler.  Oh, I've tried to watch it before.  I've rented the movie at least three times, put it on the DVR, etc... and failed to watch it every time.  I have missed screenings at The Paramount, etc...  but Thursday evening I joined Jason, Amy and PaulT (aka: "The Commodore") for a viewing.


There really isn't much to say about the movie that likely hasn't already been said better elsewhere.  For its time (1961), it pushes boundaries that you don't see become tackled so bluntly again until the heyday of 70's American cinema.  For today, its a reminder how infrequently we see movies that are actually very good instead of checking off a list of items that good movies ought to have.  Its mature in its character-driven drama in a way that I don't see anybody even trying in Hollywood these days (and that character-driven drama goes for more than Eddie, but for Sarah and other supporting characters).  The photography and direction is inspired, and its the first time in a long time I was left at the end of a movie feeling like I'd seen a great movie rather than just a good or very good movie.*

I'm not a Newman aficionado, and I'm not sure I liked this one better than Cool Hand Luke (and I really like Cool Hand Luke), but, man, it needs to be said again that Newman was an amazing actor, as well as being super-dreamy.  I only really know Piper Laurie from her role on Twin Peaks.  However, it was also a great reminder of how damn good George C. Scott was, too (I still love him not just in Dr. Strangelove and Patton, but in Anatomy of a Murder).  And, of course, Gleason in his second-best known role. 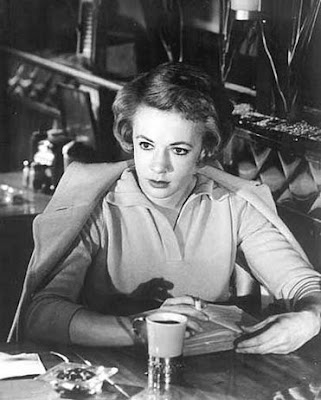 Very surprising to me was the story-arc for Piper Laurie's character, Sarah.  Its a role in what could have been a tough-guy's movie about smoky pool halls, but Sarah's very presence is what changes the entire dynamic, elevates the story and gives it a soul that movies of its ilk usually lack. Laurie nails it in every scene, handling the character with nuance and sheer believability, right through her final scene.  In fact, I find it a bit odd that we don't see more of Piper Laurie after this movie.

I'm curious to hear from anyone who actually saw and/ or remembers the 1986 sequel, The Color of Money, a movie I'd dismiss if it hadn't been directed by Scorsese.

There's not much else to say, but it was a damn good movie and I'll definitely be watching it again.

*Enough different that I just watched The Postman Always Rings Twice for the first time, and you're reading about this movie and not about Lana Turner dressed in white.
Posted by The League at 7/01/2011 10:47:00 PM