A pretty good little movie with a plot that works and a lead I found... curious. 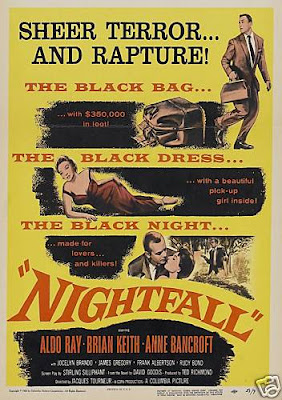 Nightfall (1957) begins in medias res, finding our lead, James Vanning (played by Aldo Ray), followed by a stranger in the streets of LA.  The stranger asks for a light, asks a few questions and moves on.  Later we learn he's an insurance investigator, Fraser (James Gregory who would go on to play Ursus in Beneath the Planet of the Apes) who has tracked Vanning to LA.  Vanning enters a bar where he meets a young (and terribly attractive) Anne Bancroft who has managed to forget her wallet.  The two strike up a conversation, and when leaving the bar together, Vanning gets picked up by a pair of heavies (Brian Keith - who I am really liking in this era - and Rudy Bond).

Probably the most significant thing about Nightfall is the structure of the narrative.  The story hinges on multiple flashbacks, all relaying information about Vanning as he and the other characters fill in gaps, putting together what happened to get the story to the point of starting.  I can't say the director (the very talented and accomplished Jacques Tourneur) took any huge chances.  There's no Rashomon-style exploration of what really happened, no point at which a major twist occurs, but the slow release of information on an "as needed" basis precludes other devices such as foreshadowing, etc...   But Tourneur's direction and sense of plotting and structure really do keep the movie far more enjoyable and watchable than it would have been in lesser hands.

Aldo Ray is an interesting choice of the lead.  Like in many noir films, he's an everyman in over his head.  Unlike a lot of noir leads, he's built like a truck, ruggedly good-looking, etc...  but he hasn't got a noir actor's timbre or carriage, not even one you find in most leading men.  His delivery and voice really does feel a bit more like someone's decent relative who fate decided to pick up and shake to see how much he can take.  And, that's really the theme of the movie in a nutshell: Sometimes its useless asking why me?  Sometimes it just is you, and you'd best be ready to deal with it when it happens.

Its a very post WWII sentiment and a pervasive sentiment in a lot of the movies listed as "noir".  And I think that's how the movie could be categorized as "noir" as well as "thriller", even when, part-way through the movie I wasn't sure it should be categorized as noir at all.  There's no real femme fatale here, no particular obsession, sexual or otherwise, on the part of the protagonist.  Its the withering finger of fate just pointing and selecting our lead, and the fallout he endures.

Ray made his start after World War II playing soldiers in an era in which it had been everymen going off to war, and even here he's a vet of Okinawa.  Hell, I can see him as Bulldozer in a Sgt. Rock movie.

This isn't a game changer, it feels like a small, inexpensive film adapted from a pulp novel, and that's more or less what it is, but its got enough going for it (Brian Keith, an interesting set up and denouement.  And most definitely Anne Bancroft) that its worth checking out.  Especially to see how the bad guy gets it in the end.  I tip my hat.