Released in January of 1945, The Thin Man Goes Home was a wartime-era film, and I think that informs a little bit about the small town, homey nature of the movie.  Rather than the usual big city, boozy shenanigans, the movie takes Nick and Nora back to Nick's hometown for a friendly family visit when, of course, a body turns up. 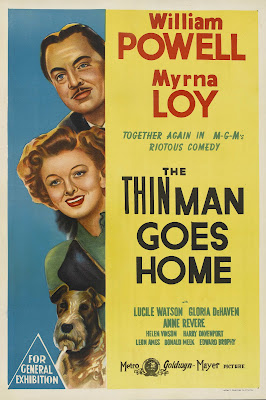 The idyllic small town with white, picket fences and charming downtown streets makes a strange backdrop after the four prior films (the last one released in November 1941), and seems a significant hop from the New York and San Francisco backdrops you may associate with the characters. The comedy is a bit softer and a bit less edgy than prior installments, and they find a work around to keep the Charles' from openly boozing and living it up, what with the war on. But that doesn't mean that from the get-go it doesn't feel like Nick and Nora or that Asta has gone AWOL.

Frankly, its counting on a lot of familiar business from the prior installments, and the comfort food tone to the film was probably welcome in January 1945, with VE Day still 5 months off.  And, of course, the war does play into the film a bit, from the overcrowding of the trains at the beginning of the movie to some major plot details.

And, of course, Myrna Loy.