I really wish I had seen this movie when it came out, but it was just recommended to me by Co-Worker Ladd this morning.

As much as I like a good, Thunderdomish Dystopian look at the future, from a technology and academic standpoint, I fall much more in the camp of pointing at the shinier spacecraft and rocket pack visions of the future.  Prepping for a time of Robot Shock Troopers tends to make you start stocking ammunition and buying property in Queen Creek, Arizona, and I'm just not ready to cut the sleeves off all my camo jackets yet, and I look terrible in a crazy-man beard.

In fact, I like my job partially because its all about the future where we get flying cars and can download dissertations directly into our noggins.  Digital libraries!  Hoorary! 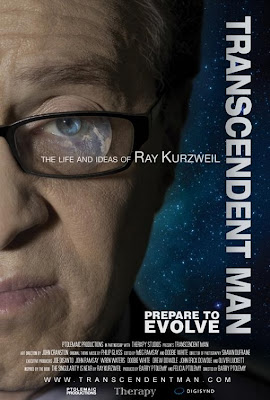 It seems that technologist and futurist Ray Kurzweil showed up as SXSWi 2012, and Co-Worker Ladd (yes, his name is Ladd) managed to see him speak.  Kurzweil is one of those names I've heard on and off for two decades, not quite the way you hear of Tim Berners-Lee, but he pops up on BoingBoing and is a name that technology hipsters tend to throw around.

Frankly, I should pay a lot more attention to these sorts of figures, because Kurzweil's personal innovations are incredible, even if that's not really the topic of the documentary, Transcendent Man (2009).  Instead, the doc follows Kurzweil as he moves around the planet as a bit of a Conference Personality, but as he also meets with figures from Colin Powell to William Shatner to an arena full of Church of Christ Conference attendees discussing the concept of The Singularity.*

As we all know, technology is advancing from all angles in ways predicted clumsily by Moore's Law.  What Kurzweil is looking at and discussing is that its not just processing power, but other technologies, falling into three areas of interest:  Genetics (bioinformatics), Nantotechnology and Robotics (or AI).  The Singularity is a point at which those things hit a point on the graph where the nature of humanity will be forced to change by the technologies so profoundly that it will rewrite our definitions of everything from technology to humanity to consciousness.

Basically, we're in a mad race to see if we create a race of super artificial intelligences, if we can rewrite our DNA to beat disease and aging while recreating the human body, or if nanotechnology will be merging us into machines while it has the ability to connect us to the super robot brains while rewriting our bodies into all looking like Fabio in 1994.  Or will we upload our consciousness to Facebook?

Here's the thing:  I think I know just enough about technology and SCIENCE to know I don't know anything, but I also tend to think that Kurzweil, while maybe jumping the gun on the timing, is probably right.

I intended to watch part of the show this evening and then return to it, but instead I watched the entire thing, slack jawed and in awe.  The movie manages to find genius after genius, players at the tops of their fields who all have different reasons to agree or disagree with Kurzweil in whole or in part, and its an absolutely gripping 80 minutes or so.  Especially as the director humanizes and builds a portrait of Kurzweil (a seemingly approachable gentleman, certainly) and digs into the basis for his quest and to see what drives him.

There are a tremendous number of questions occurring in the film, the sorts of things that have the longterm effects of global change, all without the pressure cooker or drive of a Manhattan Project.  Its happening now, and the minds pushing toward the future seem aware of the pitfalls and risks of the world they're creating, and seem to be sure that somebody else is going to deny the dinosaurs their Lysine.  Its absolutely riveting stuff.  And, again, this is a documentary.

The crowd that drifts into this blog is pretty smart and tech savvy, and I'd love to see what you guys have to say, if you've seen it or you get a chance to stream it from Netflix.


*see my hilariously uninformed argument with my brother about the concept at his blog post from about a year ago.
Posted by The League at 3/17/2012 12:04:00 AM

totally want to check this out!

Been thinking about the singularity a bit lately, as I've been reading a bunch of Vernor Vinge. Read him? He's hard sci-fi, and a math/comp-sci prof at UCSD.

A Fire Upon The Deep is the first of his "Zones of Thought" trilogy, and it's a brain-bender on this stuff.

I haven't read any Vernor Hinge. I'll add it to my "to read books" list, though.

Been thinking about sci-fi a bit lately with 2001 and John Carter. I've never been a sci-fi novel junkie, but I have always kept it in the mix. Thanks for the tip!

Wow, you really thought Kurzweil was full of crap a year ago. Makes me wanna see the movie...

Well, I still believe we're very, very far off from self-aware AI, but I also think its something to ponder now. I am less skeptical about medicinal improvements, nanotechnologies, gene therapy, etc... The issue that the film highlights is that while these are something of singular strands now, when convergence does occur (and AI does come into play), that we approach the concept of the singularity. Even when we DO create an AI, I still think it'll be something we can simply unplug in its earliest incarnations. The issue becomes, I suppose, what happens when we let the computer start building other computers.

Asimov was really onto something with his idea of the positronic brain being so fundamentally tied into the 3 Laws that it would burn up if any of those failed. I'm just saying.