A Chronologically Amiss Discussion of Mark Waid's "Irredeemable" and "Incorruptible"

Hey, have I mentioned my enthusiasm for Mark Waid's Irredeemable and Incorruptible?  I have?  Ad nauseum?

Both series have drawn to a close in the monthly installment format, but that's not how I've read either comic.  Sure, I started with monthlies on Irredeemable, but Boom! met me where I lived and began releasing trades immediately after the conclusion of arcs, something DC and Marvel grew keen to about the same time, but it seemed part of the Boom! DNA from the start of the series.

However, as the series have each drawn to a close, I am still behind.  I finally was able to catch up on the narratively driven Irredeemable/ Incorruptible cross-over I saw appearing on the stands for a couple of months, and which I've finally been able to enjoy for myself. 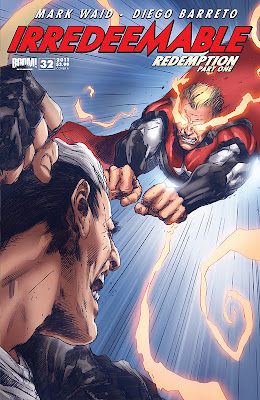 And I do mean "enjoy".  The series manage to do something which seems to obvious from even a quick glance, and that's allow Waid's voice to be the only voice guiding the single world shared by both books, and plot out the two books as counter-measures to one another, with one book following a Superman-like hero gone not so much comic book evil as omnicidal, and a stone cold, amoral villain gone so straight he's now the alien walking the earth.

It says much that the world seems more confused by the transformation of villain Max Damage to hero than the impotent inevitability of humanity's destruction at the hands of a hero who turned.

Waid could have told the story of just the Plutonian and that would have been more than enough, but the addition of the story of Max Damage, unbending hero from just a god-awful, horrendous villain (a guy bad enough that his sidekick was an underage girl he flaunted by naming her "Jailbait".  I mean, yikes), gives both stories resonance, not just about the lead characters - which it does - but about how we really feel about someone trying to do good, and our expectations of those people.  And, frankly, how alien a concept it is to see someone perform acts of selflessness.

Even the power set granted Max Damage (super strength and invulnerability that becomes stronger the longer he stays awake) has a heroic bent to it that just seemed like a minor liability as a criminal.  Max has to intentionally remain sleep-deprived for days to operate on a serious scale, staggering around with the power of a god at his fingertips, but almost out of his mind, just looking for a place to lay down, and all the craziness any of us get when we haven't gotten our forty winks.  Brilliant stuff.

There's one more collection left for each series.  I'll miss it, but I'm glad Waid has had an opportunity to tell a story with a beginning, middle and end that commented and meta-commented, and in the tradition of novelistic storytelling, it's fine if we don't get a second installment or more of the same.  I wouldn't say no to more (from Waid), but if we don't return to these characters... thanks for the series.

I really liked the start of Irredeemable and as Incorruptible continued to be published I started to like it even better than the title is spun off from. I'm not fully caught up on these series either but I plan on doing it once the final trades are out.

I was listening to the Ihnatko Almanac a few minutes ago and they said "Mark Waid should be in charge of comics" PERIOD as in all comics.

I had such high hopes for him as Editor-in-Chief at Boom!, but it seems the business plans for Boom! changed when one of the founders left. It was such a promising company.

Now I'm enjoying watching ThrillBent to see if he can't make it happen there.

I kind of hope he remains a floater til Diane Nelson cans the current DC Comics regime.