Jimmy Stewart Double Bill: "Anatomy of a Murder" and "Harvey"

Not very long ago at all I posted about my reverence for actor Jimmy Stewart.  This week the Paramount Summer Series featured a pair of classic Stewart films, Anatomy of a Murder (1959) and Harvey (1950).

You really couldn't hope to find two more different films, and that's what Paramount Summer Series programmer Jesse Trussell was attempting to highlight.  Stewart's affability is most certainly present in both films, but Harvey provides Stewart with a fantasy role in the sort of polite small town atmosphere of mid-century Broadway shows, where old ladies are silly hens and polite misunderstandings are the thing of great screwball comedy.  Meanwhile, Anatomy of a Murder is a fictionalized account of small town murder and the attorney who takes on the case despite some terribly gray areas and open questions (ie: what I believe most defense attorneys are doing when they take on a case). 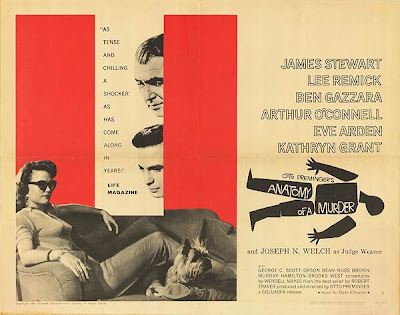 It's tough to beat Anatomy of a Murder for courtroom drama, but it's also hard to ignore how attitudes about rape have changed since 1959, that it might be something a woman brings upon herself for not being ladylike, etc... is not as in the past as we'd like, but one assumes it's not part of the argument in open court.

Still, the performances by Stewart and especially a young George C. Scott (was that guy ever actually a young man,or was he born looking middle-aged?) are more than worth the price of admission.  You also don't want to miss a young Ben Gazzara (who passed just this February) as Lt. Manion, the guy on trial.

Like the book it's based upon, Anatomy of a Murder tries to illustrate the complications of the law and machinations of a courtroom using the murder trial as an example rather than using the courtroom to tell the story of a murder.  Sort of.  I'm going with that thought, anyway.

While the basic mood of the Upper Peninsula of Michigan is sort of captured in landscape and buildings, the movie is hopelessly devoid of the accents the locals of the U.P. all carry around.*  It's too bad, because it's hard to say it wouldn't have given the movie a bit more than a mid-western setting.

You can't talk the movie without discussing three things: 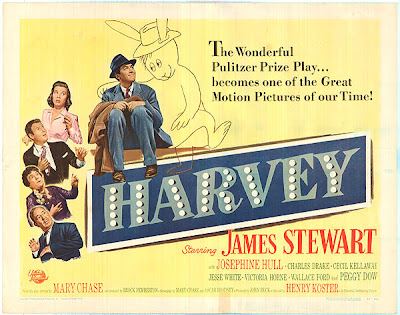 Harvey is based on a stage play which I've seen performed once or twice, and which is currently running in New York with Jim Parsons of The Big Bang Theory as Elwood P. Dowd.  Pretty good casting if I may say so.

The film is one I've seen a dozen times, having picked up the box at the video store when I was 15 or 16 and quite liking the idea of a movie about a giant white rabbit that nobody else could see.  I can't say that after all the viewings and 20-odd years I'm any less into the idea.

I quite like what the movie has to say about kindness, gentle manners and listening to one another, all sort of dressed up behind the idea of what we can and can't see and the value we put on how we usually think about the everyday.

The character-actor laden cast of Harvey gets a pretty good chance to play together as a tight, small cast in the film, and Josephine Hull is particularly great as Elwood's sister, Veta.  And I always liked the interplay between Myrtle May and Wilson.

Stewart himself plays Elwood P. Dowd, a man with a unique outlook on life, invisible friend or not.  He's a bit inclined to a bit of the drink, as is Harvey himself, but he's unfailingly polite, the uncarved block with no expectation other than the joy he takes at introducing the wonder of Harvey to others.  It's a masterful job, and I don't envy the decades of actors who've tried to step into the role (one of so many that are all quintessentially Stewart).

Both movies feature some whip-smart dialog, but I'm particularly keen on the work in Harvey, which is fantastically constructed around each character, their motivations, their misunderstandings, and gives some great short bits for Stewart as Elwood.  Terribly quotable stuff.

Harvey and Anatomy of a Murder are available on Netflix DVD,

*If you want your six degrees of Signal Watch separation:  My mom (The KareBear) is from a small town in Upper Michigan very near where the movie took place.  In 1952 a very real murder occurred in Big Bay similar enough to the one in the novel.  The defense attorney, John Voelker, went on to write the book upon which the movie was based (under the pen name Robert Traver).  Voelker had an attorney working for him, and my mom worked for that attorney.  She also saw Jimmy Stewart and Lee Remmick in town during filming.  So there you go!

I grew up going to the UP every summer as a kid, and can still pull off a dim imitation of a Yooper accent.  It's a bit like the Minnesota accent, but a little less sing-songy, and you end every conversation with "so, you boys want a beer, eh?".
Posted by The League at 6/22/2012 02:03:00 PM