Well, of COURSE I watched Mothra (1961).  It came on right after Rodan, so I recorded it to my DVR and watched it later. 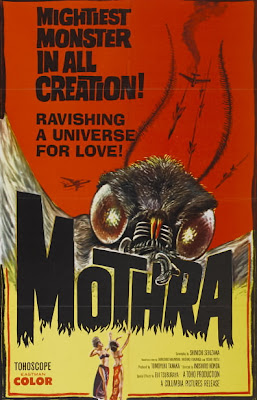 So, I don't know how many Toho Studios Kaiju movies you've watched.  I've seen about 10-15% of their output, and I've always liked "the twins", the two mysterious faeries that popped up and sang and seemed to be friends with all the giant monsters on Monster Island.  I had never seen the original Mothra movie, but had seen the giant flying bug in other Godzilla films, and not found her without her charms.  But after the super rampage that was Rodan, something about this film seemed a bit too tame, and sort of pre-sages the era of movies wherein we'll lose focus from steely-jawed scientists, wise-cracking journalists and other adults in the lead and devolve into an endless sea of kids in bad shorts named "Kenny" as the protagonist of the film.


The film plays an interesting hand, creating a fictional stand-in for the US and a villain from that country.  In essence, its the first Toho film I'd seen where the guilt for incurring the wrath of a 30-story monster upon a major metropolitan area was not directly the responsibility of the Japanese people themselves.  This was some sort of bug-based meta-commentary upon American greed and understanding of personhood, property, race and religion that sort of zings by a bit more quickly than you'd expect.

It also lifts a bit from King Kong but in a more efficient manner.  We don't bring Mothra back to Japan.  Instead, the American stand-in grabs the miniature, singing twins he finds on a supposedly irradiated island and sets them up as the trained subjects of a stage show in Tokyo.  The locals (Japanese actors in something like blackface) release the larval form of Mothra.  Chaos ensues.

There's some odd relationship with Christianity (the story even ends in a place in fake-America called "New Kirk" that has a huge sign reading "Fiduciary") and the painting of a huge cross is part of what saves the day. There's probably an honor's thesis in there somewhere to be written, especially if you start considering the "new life" form of Mothra, but let's just skip all that and point out that Mothra isn't actually rampaging.  She's just flying around looking for the faeries, but the 500' wingspan is kicking up a bit of a mess.

This was an extremely amusing review to read given that I only saw this movie once, 20+ years ago, and remember pretty much only the twins the wing span. The fact that there was some kind of religious / economic commentary on the US involved was (apparently) completely lost on me at the time.

I probably oversold it, but I think its a product of its time and trying to get involved in some of the symbolism that you see in the first Godzilla movie (which is amazing, btw).