Credit to Jason, he alerted me to the showing of the The Time Machine (1960) as part of The Alamo's Kids Club series of movies.  It's safe to say I have never sat down and watched this movie end-to-end.  What I did not know was that I had seen probably 90% of this movie in bits and pieces over the years.

Seen as a whole, it's an absolutely fantastic bit of cinema, and earns its place among the pantheon of pre-Star Wars classics, with one foot in the 19th Century HG Wells-penned source material and another in the atomic-age sci-fi boom, but landing squarely with a relentlessly tough view of humanity in something that looks like a family adventure film.  I'd also argue that, as a huge Planet of the Apes fan, I can definitely see parallels in what Serling was doing with his adaptation of the French novel of Planet of the Apes in order to tell his own Time Machine-line story. 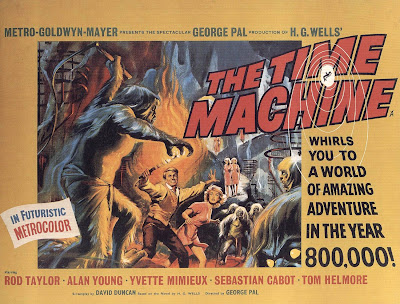 Nothing much hidden here.  Our story is about an inventor on New Year's Eve, December 31, 1899, who is disillusioned enough with the state of mankind that he has built a device which will hurl him into the future he believes exists where mankind will have overcome its desire for war and conflict.   He has a few stop offs between 1900 and 1966 before launching thousands of years into the future.

I've not read HG Wells' original novel, and I don't know much about any commentary he might have been trying to make with his two civilizations - the fatted-calf Eloi who are beautiful but dim-witted, living peacefully on the surface of an Earth that has returned to an Eden-like splendor, or the Morlocks - the subterranean dwellers who feed on the Eloi.

Perhaps Wells meant nothing other than projecting an image of a future in which man's instincts have truly divided though adaptation, and adaptation controlled a bit by the Morlocks at that.  But it's also hard not to want to project today's social and political issues upon the canvas of the film, seeing anyone you want to classify as a mindless zombie as an Eloi and anyone you want to characterize as predatory or manipulative (and ugly) as a Morlock.  Heck, you could easily make an argument  beyond politics to something as easy to read as anyone who jumped online to buy an iPhone 5 just because Apple told them to do so, and Apple happily taking the money of folks who couldn't just wait for their contracts to renew.  Or comics fans showing up every Wednesday.  Or whatever.  We won't get into possible political or social comparisons here - but it's no great stretch to imagine anyone using the images to their advantage.

While the parable does have a one-size-fits-all sort of appeal, it works because it speaks to some uncomfortable truths about humanity, both our insistence on destroying one another, and perhaps the underlying causes that make it all possible.

It's all tucked inside what's clearly a massively budgeted sci-fi film with great props, terrific sets, surprisingly good acting (especially by lead Rod Taylor).  And that strange bit of mid-century sexism that insisted the best woman was one with a child-like quality of lobotomized innocence (see:  Nova in Planet of the Apes).

I don't know much about time-travel movies, and if the predecessors to this film focused as much on the seeming innate nature of mankind.  While this one doesn't go 12 Monkeys on us and try to corner us into a fixed timeline from which nothing can change, it does conclude that man's nature is perhaps unconquerable, but that nature is also what gives us the spark to keep from becoming mere animals.

Great movie. I've been putting off getting this one on dvd for too long. As far as Wells, I know he was a self described socialist (he even admired Stalin). He had a very dim view of humanity (as the film clearly shows), which is why he saw the state as necessary to keep us from barbarism. And he also believed in Eugenics, which sparked an ongoing debate with G.K. Chesterton.

Not my kind of guy, but definitely a man of his time; someone saw the ascendancy of science and rationalism as the basis for organizing society.

That's very, very interesting. And you can see how in 1900, before history caught up with us, why, as they say, mistakes were made. The breakdown of the George character in the face of Eloi led to the fatting pen of the Morlocks in the context of the movie, is a fascinating character moment. Curiously, I think the film reads as a prescription for remaining deeply distrustful of simply falling back on an unthinking submission to any authority, be it state or sphinx head blaring its siren. If that reflects the novel, that's a curious twist as it seems that Wells' idea of authority may have been those with the control of society as perceived in his day, versus the pervasive view in our day, which is to be mistrustful of a massive government structure.

Hmmm. May need to read that book.

Yeah. I think he actually believed in some form of world government. So much of the literature of his day reflected an optimism that scientific rationalism would be the driving force of history. Based on the way science and technology was re-making the world in the 19th century, it's no wonder. A lot of stories by H.P. Lovecraft are written around a character who is a good early 20th century rationalist, who when faced with some supernatural, otherworldly horror, can't handle and comes apart at the seams. I think it's a reaction of sorts to the views held by Wells.

Wells also wrote a very popular and exhaustive book of human history book called "The Outline of History." Probably has some clues to views as well. "The Time Machine" is a tiny book. I've had a copy on my bookshelf for years. High time I dug into it.