So, Friday Marshall and I went to see David Byrne and St. Vincent

It is not a secret that I am a fan of the work of musician/ artist David Byrne.  I think I've written before about becoming a Talking Heads fan, and I have a hard time believing that over the years I haven't mentioned that I have avidly followed Byrne's career since the band dissolved and continue to be a fan.

I missed Byrne when he came through and played ACL Fest about two years ago with Brian Eno, but I've seen Byrne play a few times over the years, and I have a couple of concerts on DVD.  The man puts on a good show (ie: we recommend).

However, I knew far less about St. Vincent other than that in 2009, when I posted on Amanda Palmer, Marshall suggested I check her out.  Unfortunately, when I attempted to learn more about St. Vincent, I accidentally bought an album by someone else who also goes by the name of St. Vincent, and I never circled back to buying the St. Vincent I intended to listen to in the first place.


Here in Austin, TX, the show took place at the Bass Concert Hall, an interesting choice of venues as the last few times I saw Byrne, it was at places like La Zona Rosa and The Backyard.  The Bass is usually the home to travelling Broadway spectaculars, but it's also where I've seen Elvis Costello, so this must be the "aging but still hip to their devoted audience" artists play rather than getting gigs at the Fork River Indian Casino or whatever.

We had fairly decent seats for the size of this place.  I'd somehow been notified of pre-sale on the show, so we were on the end of Row H.  The stage was littered with brass instruments. 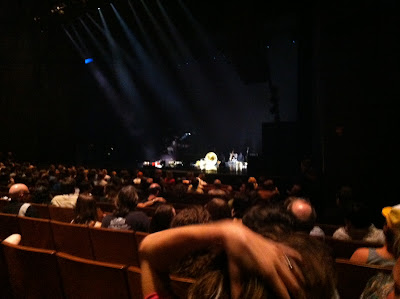 The crowd featured a wide range of ages.  Byrne's been playing out since '77 and managed to remain relevant, so he has his own fans across 2-3 generations, and, of course, St. Vincent drew in her own audience.  What you can barely see in the pic below is the balcony seats above us.  What you can't see at all is the second balcony, which also appeared to be full.  Not a bad showing. 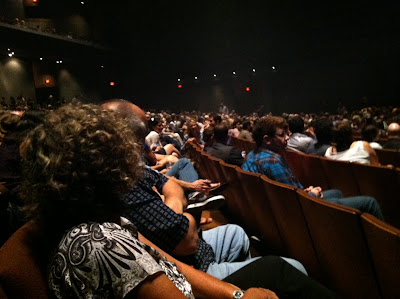 The band played an even mix of material from the new album, Love This Giant, St. Vincent's work and song by Byrne/ Talking Heads.  This meant I didn't actually know a lot of what was played, but I am pleased to say that I never felt like I was just waiting for them to shut up and play the hits.

The brass instruments were an interesting approach.  They had a rock and roll French Horn player.  That's pretty great.  Mostly, however, they played only one or two slow songs during a nearly two-hour set, and everyone but the drummer and keyboardist were in constant motion, in mini-marching band formations.  That, folks, is pretty great.

I believe they got as good or better a reaction to the show in Austin as they'd gotten anywhere.  The crowd was incredibly welcoming and if the applause was any indication, whatever they were doing was much appreciated, and the leads were sort of looking at each other like "Huh.  I guess they liked it."

I had a blast.

As I mentioned, I've never seen a Byrne show I didn't like.  They're always different, and it's fascinating to watch an artist work through his different ideas of what a show can be over the years.  The partnership with St. Vincent didn't make a pile of sense to me when I first read about it, but the album - which I think is a bit of an acquired taste - works well.  And on stage, you totally get it.

By the way, after Marshall's prodding three and a half years ago, I'm finally a fan of St. Vincent.  I picked up her latest album on iTunes when I got home (and listened to it).  And will definitely be going to see her when she comes back.

I don't entirely understand St. Vincent's dancing style, and it would take a team of scientists a dozen years and an NSF grant to get to the bottom of what's happening there, but I salute her rocking.

Thanks to Marshall for teaming up on a Friday night, especially with a new baby in the mix.

For an idea of what was going on, here's a clip from the Minneapolis show.

I immediatly liked St. Vincent when, at ACL, she said her set would be nothing but murder ballads. Plus, naming your album after a line from "Arrested Development" doesn't hurt, either. http://4ad.com/sessions/010 a nice performance from her label's site.