I kind of want to be out of the business of thinking about DC's moves as a company, because it's equal parts equally unsatisfying and depressing.

In case you missed the interview with Co-Publishers Dan Didio and Jim Lee that was featured at places like Comic Book Resources yesterday, they're basically moving forward by going back to not tying every book in the DC line to superhero mainline continuity.  As comics were up through the 1980's, DC and Marvel surely put out Superman and Spider-Man, but we didn't need to worry how that fit in with Teen-Age Romance Comics or Katy Keene In Love or whatever made up title I just made-up.

And DC is going back to - maybe not putting out Teen-Age Romance Comics - but they are saying "not everything here is in the main DCU, so quit worrying about that".

Jim Lee, who I am pretty sure has no idea what an actual buyer of comics looks like or thinks, was quick to tell his core audience that we're mistaken for wanting continuity to work in an ongoing serial.  And we were also mistaken for expecting both the New 52 to make sense and the five year time jump to hold together after DC said "it all makes sense, we'll show you" and then absolutely did not do so.

Now, all of this is coming on the heels of Convergence, which is a munging of the DC Multiverse, and because it's been a few years, I think we all needed to expect Didio was going to once again reboot the DCU.  They're not saying that, but they are absolutely saying that the characters will have new, unheard of status quos.  So, practically speaking, a rejigger if not a reboot.

So, let's review the images for the solicitation copy, shall we? 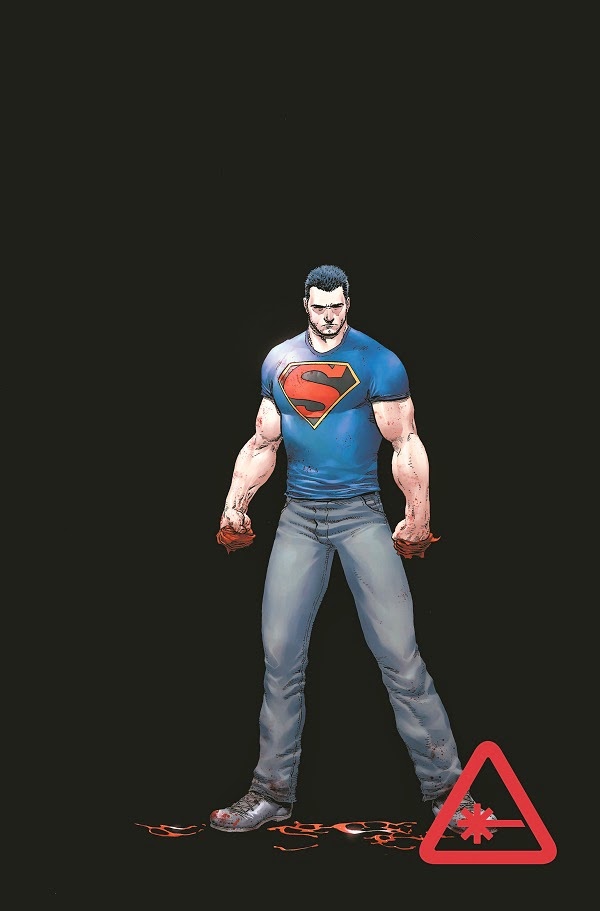 Superman is back to "jeans and a t-shirt" with the "S", but it's not the Lee-designed "S", and it's a throwback to the Fleischer-era/ just-post-debut "S".  We know that Johns destroyed the armor in Superman #38, which I applaud, because that armor was a simply terrible design and had been since day 1.  The "jeans and t-shirt" look from the start of the New 52 Morrison Action Comics run was intended to be a throwback to Superman's progressive social warrior roots, of a working-class guy taking on corruption in a way that guns nor money could stop.  I have no idea what's planned here, but it seems like an indication that the armor is gone.  I don't know if they're going for a "relatable look" or if they're indicating anything in particular.  Who knows, really?

I would like to speculate that this is an interim look before we get back to something more in line with the classic Superman look - we're bringing him back to his New 52 roots, but with a classic look to the shield, we're telegraphing the change - but that seems like it's giving DC a lot of credit where it is not due.

I was not terribly upset by the new power revealed for Superman in Superman 38.  He does the "death blossom" bit and goes powerless for a bit.  For a superhero the layman will always criticize for being "too powerful", I am sure this has been catnip for writers finding out they now have a vulnerable Superman.  Frankly, I kind of knew the kind of work-for-hire folks who generally write Superman would immediately begin using this loophole in ways large and small to make Superman bleed a lot, and here we are. 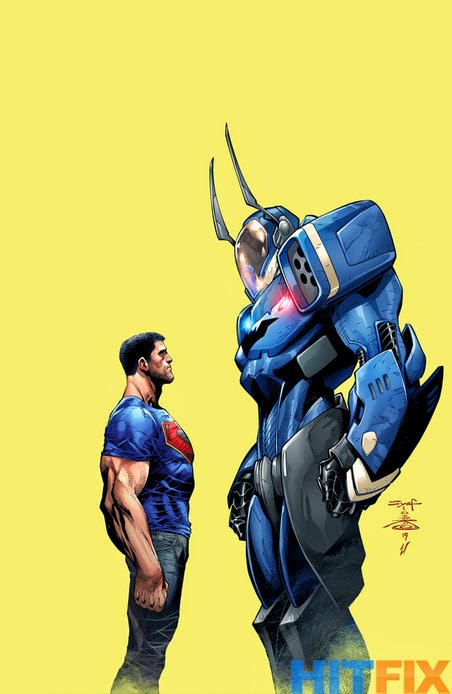 I understand this is the Batman/ Superman cover and the mecha-guy is Batman for some reason.  This title is hard enough to care about, and mecha-Batman holds as much interest for me as B-sides on an Iggy Azalea single. 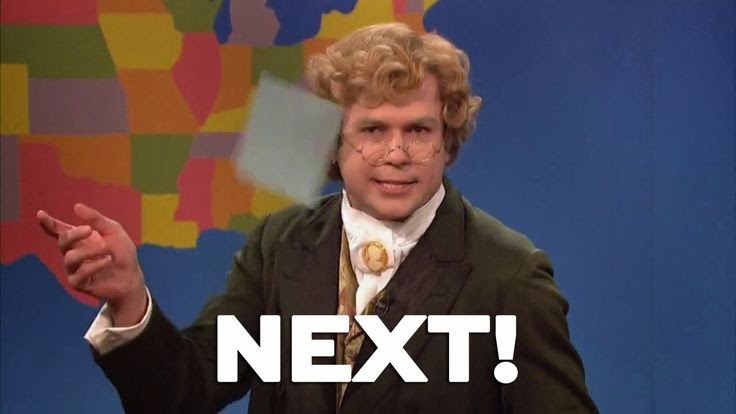 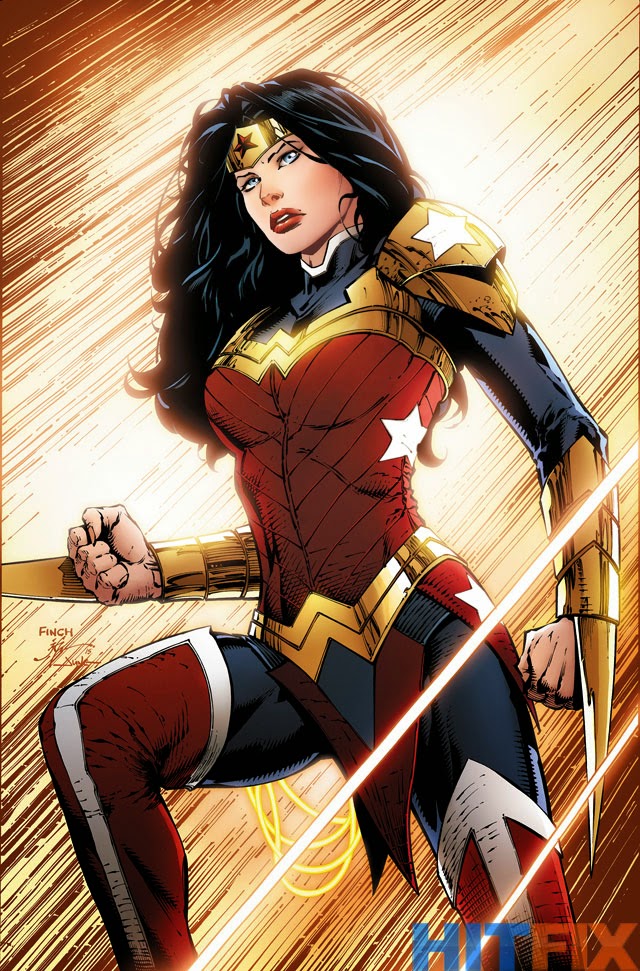 Well, I'm not going to be as hard on it as you'd think.

As much as I found fault with the Superman New 52 costume from a sort of design and character sense, at least it didn't look like a coloring error.  Wonder Woman has looked like a coloring error mixed with 1980's lingerie specifics (a choker?  really?) for the past few years.  I have no idea why DC decided Wonder Woman would be improved if her metal components were silver, but it was a weird, weird design decision and basically washed the character out in every panel where she appeared.  Yellow pops, gray is... boring.

And, as silly as this look might be in some ways, let's not forget the "Odyssey" look from justa  few years ago when DC first tried to "fix" Wonder Woman.

And they were so serious about thinking they had a new look on Wonder Woman, they tried to sell that as a Halloween costume.

Seriously, the look didn't last a year, and they were trying to trick people into getting drunk at parties in that outfit.

When the New 52 launched, WW was slated to have pants and a bustier and choker in the New 52, but sooner or later someone pointed out - as much as everyone laughs about Wonder Woman in briefs or whatever, if you put her in pants, she becomes basically invisible.  Her design, like the classic Super Suit, is iconic.  So, you know, if you want your WW to be WW, there are some things you kind of have to do.  And no pants with boots is one of them.  You can't have people looking at your very valuable IP and saying "so... who is that?"

Now, let's be clear, the new outfit looks like the 90's called and asked for work to cover some bills.  I mean, it's been a while since I've seen the "Wolverine of the team" concept taken so @#$%ing literally.*    It seems more or less like a Project Rooftop challenge that kind of succeeded, if you remove the claws.  It returns gold to the look, the boots are red again, the tiara isn't all weirdly shaped, and there's slight evidence of the magic lasso, an item no writer seems to remember that Wonder Woman owns and can use.

While she's sporting pants, someone understood how to break up the shape from a design aesthetic and cover Wonder Woman in a suit as much as her male counterparts without it feeling like someone cramming slacks or women's activewear onto the outfit.

Unfortunately, it's a bit much, though, isn't it?  I mean, I like the loin cloth more than Supergirl's New 52 red diaper.  This is definitely an outfit that's lending a suggestion of "practical superhero wear", but shoulder pads don't really make sense when there's no other armor.  It's just not actually practical - but, you know, you do that and you're right back to White Snake groupie Wonder Woman.

All of this feels horrendously temporary to me.  The 3-4 month cycle of previews and comics pre-ordering and all that means DC has to get out in front of the preview info, but they also can't just let Superman change clothes mid-story if that's what's on the cover.  What's on the cover suddenly becomes the story rather than the actual content of the comic.

DC has been doing it's real shake ups in September, and as Superman looks like bros from my gym in these pictures, I kind of suspect this is as temporary a look as anything yet in Superman comics, but I have no idea what they'll actually do next.  It's not really enough, certainly, to make me want to buy a comic to find out, if I can just wait for covers to be the story, and those are free on in the internet.

We'll have to see, I guess.  I'm sure Didio and Lee are doing the same.

Hehe..thanks for the Last Starfighter reference that made me smile.

Yeah, I'm pretty convinced that I have aged completely out of super hero comics or at least the ones published by DC. Cause when I look at the stuff Marvel is publishing I'm much more interested especially the stellar Ms Marvel but I digress.

Certainly the Superman costume change is temporary. I'm pretty sure they will use this for a few months until he gets a new (old) costume again.

The Batman one is ridiculous. Did Snyder forget the whole point of Batman is he is a human without powers. Putting him in a suit like this just makes him Iron Man.

WIth Wonder Woman they have no idea. Even after a critically acclaimed run by Azzarello they can't seem to figure out how to make her popular.

Also, on the comment that Jim Lee made about continuity, that is completely out of touch. Doesn't he realize the most popular movies on the face of the planet are all linked together by their own continuity. It seems to me that that is exactly what fans want.

I'll be honest, I'm tired of speculating about DC, but all of this is so obviously not what they sell as Batman, WW and Superman that it just seems entirely like a bit of fun the DC editorial folks are having before they return to status quo. Unfortunately, that means 3-12 months of wading through yet ANOTHER iteration where the heroes aren't themselves. Unfortunately, as this is now one of 2-3 rotating stories in comics these days, it's been years since Superman was just Superman for any sustained amount of time, or someone wasn't fixing or rebooting Wonder Woman. Batman is pretty much always Batman unless he's Dick or Azrael, so... yeah. I certainly am no longer a Superman or Wonder Woman completionist, and this is why.

I simply do not get Jim Lee. My feeling is he's around to buffer Dan Didio from the creatives as he's a legendarily "nice guy". But every time I see an interview with him, it's like Tim Cook talking about how the best thing he could do for Apple is introduce the iTypewriter or the iCalculator. There's a logic, and someone will buy it, but it's out of step with the market.