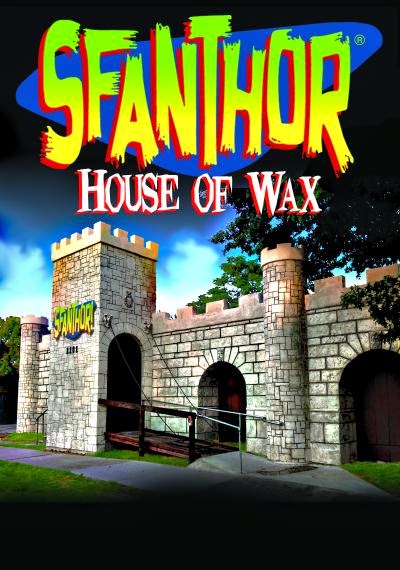 For reasons I cannot firmly recall other than fanboyishness, I follow Vincent Price on facebook.  So, I was a little surprised on Friday to see the folks managing the account - managers of the Price estate - be the ones who broke the news to me via a link to an Austin Chronicle article that the weird castle that's been under construction on touristy South Congress was not a hipster medieval bar, but a WAX MUSEUM AND HORROR-THEMED STORE.

I had no Saturday plans, so I grabbed JuanD and he and I braved the usual Saturday traffic and crowds of South Congress (it's the kind of place where you stand in line for 45 minutes for a magical Austin ice cream - hint, it's just Marble Slab - or 2 hours for a @#$%ing cheeseburger.  G**damn this town), and went to check it out.

I was maybe two feet inside when I wished Stuart were here to see this.


I've never been a splatter or slasher movie fan.  I don't get much out of watching people scream while fake blood sprays the set.  Obviously dying in terrifying ways IS horror-ible, but it should come as no surprise to anyone who has followed me for a while that I'm really more of a creatures and classic Universal Horror fan.  And, yeah, absolutely Harryhausen stop-motion monsters, Hammer's colorful brand of polite horror and the Vincent Price pictures like House of Wax.*

I don't consider myself a horror aficionado, but I like what I like, and somehow Sfanthor! occupies pretty much exactly that same spot in my tastes.  I'm totally a guy who will pay two-bits-a-gander to see things on the midway (Jamie is still in disbelief that I paid to see "A Very Large Horse" at the Arizona State Fair ten years ago, but, people...  that horse was huge), and I'm the first one to casually suggest "hey, anyone want to go to the wax museum?  It's expensive, but it could be fun..." and I act like it doesn't bother me when no one else wants to go.  Because I totally want to go.

Sfanthor is about 1/4th-1/3rd retail space and the rest is a wax museum of awesomely classic horror.  These are the big guns.  There's Count Orlok five feet past the heavy red, velvet curtain (I KNOW) and info on the early German Expressionist horror films like Nosferatu, Cabinet of Dr. Caligari and The Golem.  You don't get too far before there's a Lon Chaney section, with several of his characters including London After Midnight. 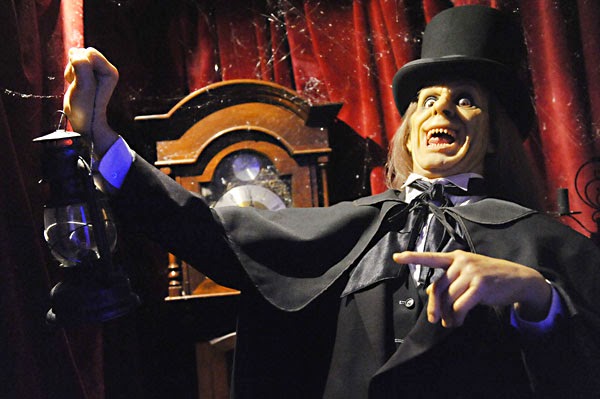 It was at this point I was super excited.  I'd been a little nervous we'd basically walk into a room full of beheaded wax figures and I'd say "oh, yeah.  Well, that's cool, I guess."  Instead, this was someone whom I felt really knew their stuff and, as JuanD said after we left - you don't do something like that unless it's a real labor of love.

We moved into the Karloff and Lugosi section, a nod to Tod Browning, Harryhausen, and more.  A perfectly designed Creature from the Black Lagoon greets you around one corner, and the detail on Dracula and Frankenstein's monster is perfect.  And you wrap the whole thing up with Giger's Alien in a stunningly nice bit of set.

You'll notice I didn't post any photos of my own.  Well, I asked and they have a "please, no photos" policy, and I tend to take those sorts of things pretty seriously.

Now, I also am aware, many Austin business owners are forced to open before they're really ready as SXSW descends upon Austin, and the museum itself is not entirely complete.  There are several exhibits being worked on, including Vincent Price and, one I'm particularly jazzed is coming - The Bride.  So, maybe wait til after SXSW if you're wanting to see the full museum.

As for the shop - it's really pretty great and an odd assortment that looks like someone plundered my own collection.  There's a wall of comics (really, some choice Marvel stuff I recommend you get to before it sells), an assortment of vintage model kits, figures, etc.. on sale.  New post cards, t-shirts and posters on sale featuring horror icons, and a lot of horror statuary.

Look, I love this stuff.  As I told the owner's wife "I am not a good person to ask for feedback.  I like ALL of this stuff.  I don't feel like I can really suggest how one would improve the experience".  I don't know exactly how or why Sfanthor! now exists, but I am pleased as heck that it does.  Looking forward to force marching people through the place this year and seeing what a complete SFANTHOR! really looks like.


*will someone tell me where I can see The Abdominable Dr. Phibes, because that thing will not show up on Netflix no matter how hard I wish for it
Posted by The League at 3/08/2015 01:05:00 PM

In regards to Phibes:
https://www.shoutfactory.com/film/film-horror/the-vincent-price-collection

You should probably just buy these because they are AMAZING!

It's all right. I'm not complaining. It's just dumb to wait for in the rain.

I'm a huge fan of Shout/Scream Factory. They put out a lot of dreck, but they put out some of my favorite things. I'm more excited about their new coming releases than Criterion at this point.

All that is to say, I love what they are doing and I want to support the things I love.

Amazon has each for less than $60. 13 movies with a bunch of special features (Roger Corman commentaries!) for less than $120. Major win in my book. Plus, 9 or the 13 are must-haves in my collection.

all right! Well, I may not order the first set until next month, but that's a pretty convincing sales job.

Every time I look at the name of this establishment my brain substitutes "Santor". Which, a house of Santor would be pretty terrifying, so.

I'm bummed that I missed out on this place.

It's permanent - until they run out of money, I guess. I was planning to take your father-in-law when he comes to town to see Seamus.