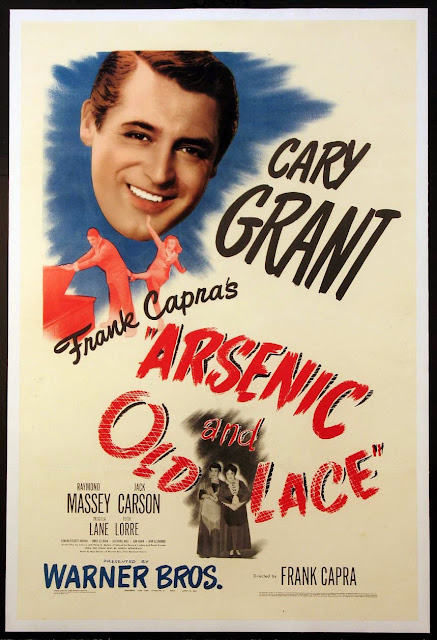 A wartime Frank Capra movie, Arsenic and Old Lace (1944) was a popular Broadway show, and that's about all I know about it.  Except that the original play starred Boris Karloff as a guy who looks a whole lot like Boris Karloff (no, really), and I had to do a scene from it at high school drama camp (oh, really), which we did a little heavy handed, I guess, because no one got it was a comedy scene and on the last day of camp, one of the girls told me she was surprised to find out I wasn't a creepy stabby guy the way she felt I'd been in that scene.  So go figure.

The movie is more or less the play.  And the movie is about a drama critic (Cary Grant) who has fallen in love with the girl next door (Priscilla Lane, cute as a button) and gotten married at the local courthouse.  He's from an old-money New York family, who, apparently have a strain of insanity running in the veins.  An uncle who thinks he's Theodore Roosevelt, and two sweet old aunts (one played by Josephine Hull who was in everything during the 40's), he pops in on to tell he's off to Niagara Falls, only to learn they seem to have killed someone and put him in the window seat.  And that corpse isn't the only one.

Wacky hi-jinks ensue.  A sadistic older brother returns mysteriously after decades away - and he seems to have racked up a body count himself, and accidentally gotten the face of Boris Karloff during some quick plastic surgery to hide his identity.

The material is definitely of its time, and its a curiosity that they couldn't get Karloff for the movie and had to put someone else in Karloff make-up.  But, apparently, Karloff was still in the play at the time and was busy.  Who knew?

It's not my favorite screwballish comedy from the era.  There's something off in the pacing, and it feels oddly clumsy to me.  I'd only seen the movie once or twice before, the last time being at least fifteen years ago.  I'd wondered if I'd like it better now, and I guess I kind of did, but...  yeah.  There you are.  It has all the components of something I think I'd like better, but somehow it just never quite clicks for me.

I do love this one, though. CG is at his best in slapstick, I always think. It is definitely of its age, but I watch it nearly every Halloween. Those two sweet old ladies..."But Mortimer...." :)