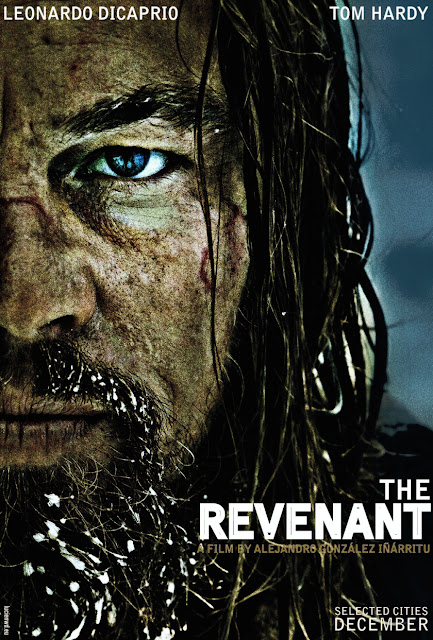 What hit me as the movie progressed is:  I've become an arbitrarily picky movie watcher.  There's no science to my taste, no real sense to it.  But, oh my god, am I hard on anything that actually tries.

I'm the guy who didn't particularly like The Revenant.

I do not want to be the guy who doesn't particularly like The Revenant.  It's going to put me in an awkward position in polite company or in discussion with people with good taste when they start nodding in agreement that, yes, The Revenant was clearly another modern masterpiece by that Iñárritu fellow.  After all, Leonardo DiCaprio may finally receive that award the press seems alarmed he's been denied for too long because he appropriately grimaces for 85% of the movie.*  There are lots of slow pans on trees and the rugged landscape of the American West.  And the film bleeds regret for the Anglo expansion into the West and the U.S. policy of aggression against Native Americans.  It's got a checklist of things that Academy voters tend to really like in movies that they will vote for.

At some point I felt it was Jack London meets Dances With Wolves meets Gladiator, all fine things, but things we've seen before, from a visual and story perspective.

If the movie has one thing I think that should earn it all the praise due, it's certainly the cinematography and Iñárritu's unique directorial style within the constantly moving frame. This isn't the stuntwork of Birdman's cinematography, but he applies the lessons from that film to capture the landscape and action in ways that usually rely on the wide-angle Panavision feel in most films about the American West in the 19th Century (see: Legends of the Fall).

It doesn't happen anymore, but there was a period when people who didn't know much about comics would find it interesting I read comics as a human over the age of 13, as this was not something they thought a human would do.  Somewhere in there, they would start pitching me ideas for what they thought would be neat to see in comics if they wanted an audience of adults.  Why, I don't know.  It's not like I had Jeannette Kahn on speed dial.  But, invariably, they'd pitch me something that was already in comics.  And I'd say "Oh.  That sounds like what they're doing in Justice League." or "yeah, you're kind of describing Shade the Changing Man." or "well, if you like that idea, you should look at some (fill in the blank)".  Invariably, my helpful friend would get huffy, and, under no goddamn circumstances were they going to actually check out their own pitch.

And that's what I kind of wondered while watching The Revenant.

Has Iñárritu seen Dances With Wolves and it's hand-wavey apology to Native Americans?  Sorcerer ?  Or any of a dozen other tone-poem man vs. nature films of the past 40 years?  And, for all the imagery of Leo thinking about his wife and his singular quest for revenge, had anyone else seen Gladiator?  Is he unaware that the only original bit this movie is the camera movement?

A guy avenging his slain wife/ child/ family is kind of the oldest story there is.  Man struggling against the environment is hardly anything new (we have a term for this!  It's "Man vs. Nature"!  And, yes, the outdoors are scary and there's a reason I seldom go into them.).

Look, there is nothing new under the sun.  Movies influence each other, movies reflect what's come before, intentionally or otherwise.  My high school English teacher told me there were essentially 4 or 5 stories we just keep retelling, and I guess this one is The Odyssey.  So, what's important is the execution, and by and large, the execution here is technically very, very good.  But somehow the movie just lacked tension.  After the bear attack - I have a hard time believing that anyone would have had that hard of a time guessing the rest of the plot in major beats.

If I draw parallels between this movie and Dances With Wolves, a movie I admit I have not seen since it's first year on VHS, I recall we all felt pretty great about how this movie demonstrated the injustices done to the Native American people through the eyes of a white guy who lived with a Lakota tribe - and it was through the eyes of the white guy that we got the message.  Here, again, the point of view is not that of the Native Americans themselves - it's how the white guys react.  In both films I'd argue a large measure of respect is extended, but it's on certain terms and with real dirt bag characters to represent the opposing point of view of white guys ready to commit genocide rather than the politicians making cold calculations back on the East Coast.

Like I said, what the movie does, it does really, really well.  Leo is in miserable, buyable anguish throughout.  Tom Hardy plays a perfect shitheel.  The camera work is incredible, and it's been a long time since a new movie went to these lengths to showcase the spirit of survival - against all odds - in a character.  In spots it's genuinely harrowing, and you do (mostly) pull for DiCaprio.** It has a terrific score.

But I foresee at least 2-5 years of awkward party conversations where I listen for a minute as folks agree this movie was super fabulous, and then I do that thing where I say, "Yeah.  It's pretty good.  But don't you think that..." and everyone hates me.

The truth is, were this not a film by Iñárritu, and the film not earned reputation as a plagued and troubled production with an Ahab-esque director, I am not sure what I'd be saying.  I guess for all the effort put in, I had the same "huh" response to what can feel, oh sure... pretentious when you're not sure it's earned that pretentiousness as much as it thinks it has.  And, in the end, that makes me more or less Peter Griffin in this scene.

Still, if you're going to see an oater in the theater right now, it's much better than Tarantino's grating love letter to his own self-indulgence, Hateful Eight.

*let's be honest, people who win any acting awards are more likely to win for something the film does as a one-trick-pony sort of thing than any actual acting.  And I don't really think this movie is any exception.

**look, there's a pretty good argument for not carrying a nearly dead and certain to die guy with you over a mountain in January weather in the Rockies.
Posted by The League at 1/18/2016 07:24:00 PM

I see what you did there.

I wish I were that clever.

I can't believe that bear pun wasn't written on purpose.

Anyway, you need to watch Ex-Machine (I think it's free on Hulu/Netflix). I would love to hear your screed on it. The movie was universally loved.

I'll give it a shot soon. Meant to over the weekend, but ran out of time.

And, yeah, I wish I could claim that pun, but I feel that'd be a sad bit of dishonesty if I did.

He's not gonna like Ex Machina. I've seen it, and my 40 years of experience with The League makes me think he will not care for it.

I'm hardly the one to insist I liked something just to be contrarian. We'll find out, I guess.

A) I haven't seen them all, but the handful of Fast and the Furious movies I have seen (well, just 5 and 6 so far, but I have them all on BluRay if you ever want to dive in) were great. I remember working at Suncoast during college and making fun of them and the people who watched them, but, they really are quite good at being the action movies they are. I mean, John Pierson and other art-house people really dig them. Someday you should give them a shot.

B) I have avoided reading much on The Revenant until i got a chance to see it (been busy...but...catching up now). I am on team Ryan though. This movie wasn't very good at all. It was EXTREMELY longer than it needed to me. I feel like it's a Terrence Mallick film for dumb people. I was pretty bored with the whole thing. I had seen enough about people commenting on the bear scene to be completely confused as to how anyone could think that CGI bear was worth putting in a movie.

I didn't think Leo was doing anything all that good. Sure, I guess it was believable, but, I didn't care. Looking at the other nominees I feel like he has a chance though. Or Hollywood will give the award to Cranston for playing a screenwriter.