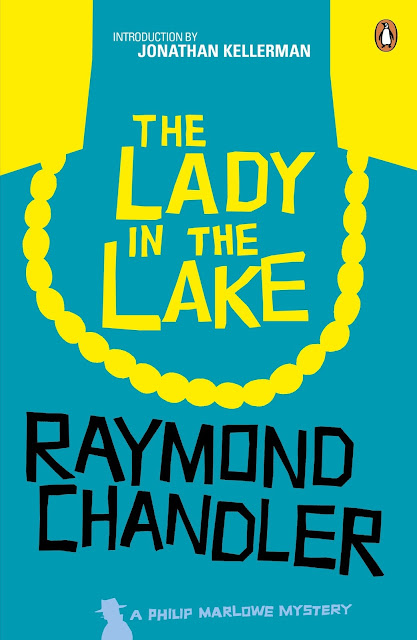 
I'm trying to read the Philip Marlowe mysteries in order.  Or, at least, listen to the audiobooks.  After this one I'm taking a break for a 33 hour audiobook on the life of Walt Disney,* so this'll be likely a last review out of me on an audiobook for a bit.

Marlowe is hired by a decent but hapless businessman to look into the disappearance of his semi-estranged wife.  The guy and his wife haven't had a divorce yet, but it was imminent, and he didn't mind if it came - partially because he's carrying on with his smart, attractive assistant and his wife has her own money.

She claims to have been headed to Mexico for a quickie divorce and to marry her handsome but sleazy boyfriend, which is okay by the client.  But he just ran into the boyfriend, who claims not to have seen the wife in over a month - longer than she's been missing.

Marlowe heads up to the mountains to the gentleman's lakehouse to try and start at the beginning.  There, he's talking to the caretaker, who's wife went missing about the same time (a drunk, hot tempered fellow), when the caretaker spots a body submerged in the water.  Pulling the body out, they learn it's the man's wife who ran off.

From here, the story gets compounded and twisty, with shady cops invested in keeping "peepers" out of town, more bodies showing up, creepy hotel bellhops, doctor's with iffy side-business, and everyone a possible suspect.

The book is also a war time book.  The High Window took place prior to Pearl Harbor, and it's a world without Tojo or Rommel.   Released in 1943, this book reflects some of the realities of wartime America.  Folks talk about rationing rubber, men aren't on the grift or hustling.  They're resigned to what's happening around them as they await conscription, enlistment or commissions.  Soldiers watch landmarks and vulnerable spots, and it seems to take place in a narrow window, which Marlowe himself mentions, before they were dimming harbor lights and reducing America's ability to be a target.

As much as I liked the last Marlowe book, The High Window, this one is larger in scale and - despite the fact I'd seen the movie - kept me guessing with every new detail.  In short, I really enjoyed it.  The book has both Chandler's attention to detail and a wide array of colorful characters.  Maybe he's met these folks in real life.  Who knows?

I am positive that now that I know everything, it'd all just click.  You can make some educated guesses out of the gate, but motives remain elusive, and so it's hard to pull it all together.  While the book relies on the patented detective reveal in the penultimate chapters, it doesn't feel overly staged and doesn't rely on circumstance in the same way as the prior novel.

Even unlikable characters are at least interesting, and some of the characters simply baffling, eluding Marlowe, such as Ms. Fromset.

Different from the movie - there's certainly no Christmas-time setting, Ms. Fromset's role is significantly different, and all of the actual stuff at the lake is cut out of the film, mostly because it culminates in retrieving a dead body that's been soaking for a month - unfilmable in the mid-40's.

Again, the acting talents of Ray Porter are pretty amazing.  Yes, I have noticed his range is limited when it comes to women - but he does pretty great characters, and deals with what could be dated and problematic characters as well as one could do.


And, yes, the season Premier of Marvel's Agent Carter was, indeed, called The Lady in the Lake.  But aside from some visual reference to general noir-esque movies, there's no plot-wise connection.