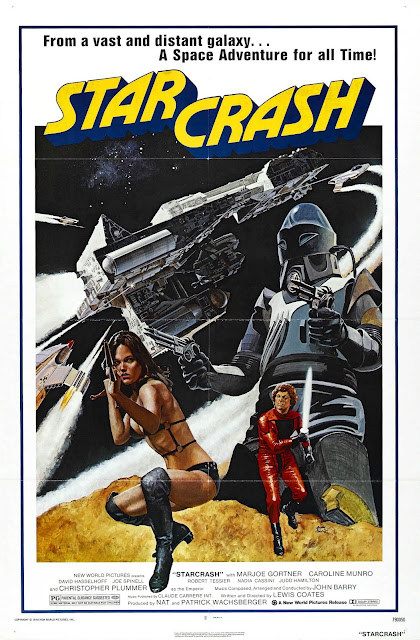 Thus, I'd never bothered to watch Starcrash.  But, I knew it contained Caroline Munro in her most famous role.  Oh, yes, Bond aficionados, she was in The Spy Who Loved Me, but this is much more a leading lady than a supporting role.

But, hey, we've got Vulcan Video near my house now, and so far I'm batting about .800 finding movies I've been seeking out for a while.

Now, Ms. Munro will get you in the door, but once you're there, prepare yourself.  Because it's really been since watching R.O.T.O.R. for the first time that I last saw a movie that so genuinely felt like the producers just saw a movie they really liked (RoboCop in the case of R.O.T.O.R., Star Wars in the case of Starcrash), somehow pulled money together, wrote exactly one draft of a script with no foreknowledge of how a story works, and set out to make a movie that stands completely on it's own.  It's the kind of movie made by people with a lot of passion, they know what they want in their movie, but they don't know why the things their lifting from work in the source material.

It is not a good movie, or a competently made movie.  It takes a good 20 minutes to get to the point, dinking around with "things that are happening" that only loosely inform anything else in the movie.  The plot makes zero sense (in a fun way), and the most sympathetic character is a guy with a lamp and Xerox machine on his head pretending to be a robot.  It's a movie that wants to sell sex via Ms. Munro, but seems to handle girls about as well as your average second grader.

In some ways, I tip my hat to the filmmakers.  They had a series of scenes they wanted in their movie, mostly pastiches of other terrible movies, and they set about finding an excuse to have Caroline Munro's spacepilot character, Stella Star, appear in all those different scenes in a quest to find a downed crew of an Imperial starship - at the behest of Emperor Christopher Plummer, who the movie clearly only had for a few working days.

In addition to Ms. Munro and Christopher "My Agent Told Me This Would be Great" Plummer, we do get a young David Hasslehoff in a small part in which you realize The Hoff really only has one line delivery mechanism, and it's Michael Knight all the way, baby.  And, Munro's asexual, super-powered guy pal, Akton, played by Marjoe Gortner.

I bring up Gortner for a couple of reasons.  (1) His bio reads like a novel where the author is trying way too hard, and (2) because he's also in Bobbie Jo and The Outlaw.

"But, The League," you say.  "I have never heard of Bobbie Jo and the Outlaw."

Well, Bobbie Jo and the Outlaw is the forgotten 70's-era film in which a pre-fame Lynda Carter goes on the run with the very weird-looking Gortner, and may or may not remain fully clothed throughout the film.  I may or may not have seen this movie, and and it may or may not be terrible.**

But, back to Starcrash.

It's hard not to have affection for the film in the same way you enjoy seeing a local community theater production of Oklahoma!.  If you embrace the rough bits as part of the mise-en-scene, somehow it Voltrons its way into becoming greater than the individual parts.

I mean, it even has a score by John Barry, in theory. but while watching the movie I had a memory from film school.  My friend My was supposed to score one of my films, but he basically forgot.  I called him a day or two before we were supposed to pick up the tape from him, and got this "uh...  yeah.  I didn't do that."  So we talked for a minute and I said "well, the movie is about two and a half minutes.  You got any songs that long?" and indeed he did.  So, we had a score.

I kind of think John Barry just handed these guys some tapes, because the music does a lousy job of syncing to the actual mood of the scenes.  But, it's pretty chipper stuff.

I really don't want to give anything away, but the movie is weirdly kind of fun to look at.  I think the spaceship designs were garbage, but some of the set design and whatnot is kind of crazy fun.

Anyway, give it a chance, drop your expectations into the basement, eat some candy or popcorn and enjoy.  You'll have a lot of questions, you may not understand why anything is happening, but it's a hell of a movie.

*or the fine hosts of USA's "Up All Night"

Oh my goodness thank you. I now have two new must-see movies.

Thanks again for the suggestion. Starcrash was amazing.

I'm glad I could assist!

In case anyone wants to see this movie NOW!!!!

Wow. Just skimmed over the movie on Youtube (Thanks J.S.). That was something. I'm curious. Were any of StarCrash's filmmakers involved with Zardoz? Christopher Plummer must have had the same agent as Sean Connery and Michael Caine at the time of this film, but unlike them Plummer had the good sense to fire him. Meanwhile Caine (JAWS 4) and Connery (Sword of the Valiant) would appear in head-scratchingly stupid, low-budget films for at least another decade.

By the way, if you don't mind, I would like to borrow "pathological disregard for character" from time to time. Even so, it's highly charitable review.

Also, I just saw that "Hell Comes to Frogotown" is streaming on Hulu. I haven't seen it, but the premise and the cast are literally begging for a Twitter viewing ASAP. Just look at the trailer.

So, "Zardoz" is by John Boorman, who made some decent movies! "Excalibur" and "Point Blank" to name a couple. Jaws 4 I always saw as what they call a "postcard movie". That's where they want a cheap sort of movie made and it's filmed in a vacation location to get the actors to show up. Think of "Battleship" from a few years ago. Mid-star level cast, and probably filmed for a few months in Hawaii. Not a bad free trip for an actor. I can see Michael Caine - who was in a weird career place at the time - saying "I go off to the islands, get some sun, do some acting, chip chop, I'm home again".

I have seen "Hell Comes to Frogtown" circa 1993 and it is everything you think it is and more.

You're right. Zardoz is much better than this. Didn't know about John Boorman, though. The first half of Excalibur is still a very entertaining watch.