I hadn't really planned to go to the Women's March in Austin early in the week.  While I understood and supported the idea (more on that later), I also am of the opinion that the last thing anyone needs at a march for women's rights - and as the event drew closer, LBGQT rights, the rights of POC, the rights of people non-Christian faiths, the rights of immigrants - was to have a giant, 40'ish, straight, white man standing in the middle taking up space.

"Will you be going to any of the marches?" a colleague asked me.
"There's not really a march for boring white dudes," I said.
"Well, you could always come out in support."

Support, indeed.  Maybe I wouldn't just be in the way.  When I mentioned maybe going to Jamie, she was on the idea like white on rice (and hadn't asked because she knows I like my Saturdays for coffee and contemplation.  Sometimes we do that thing where we don't ask each other if the other wants to do something because we both assume the other won't want to, but we're both into the idea), and because Jamie is a woman and I support her, we were off to the races.

Now, this isn't a blog on politics, and despite my personal misgivings about the new president and his crew, I am not planning to turn this into my soapbox (much).  But, I gotta be me, and so occasionally don't be shocked if you see a This Moment in History (tmih) post, or an Actual History or news post.  Or, even something personal.

And, yeah, participating in one of the largest collective protests the country has ever seen (and I will go to my grave telling you that the 50K number being quoted for walkers at today's march in Austin is too conservative an estimate) is something I did, it was a newsworthy event, and so, it's going to wind up on this site.  You don't have to read the posts and you don't have to care.  There's no fee either way. 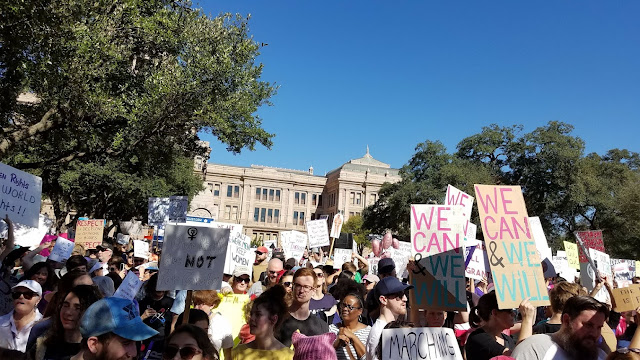 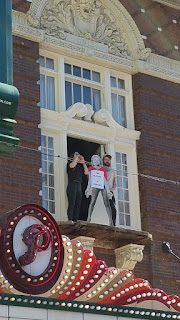 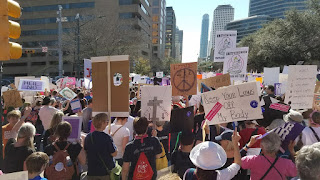 Someone asked Jamie on fb why she had attended the rally, drawing a comparison between Bill Clinton's indiscretions and those of Trump (which, while no one comes out looking great in either case, I'd argue Trump's history makes Bill's look like amateur hour).  The question was deleted after receiving the initial parts of the response.  So, this is what we left as the final word on why we were there:

To the deleted question: I know the reason we attended this rally went well beyond questions of sexual harassment. It is highly likely that the new administration will make access to women's healthcare more challenging, slow or reverse progress made for women's wages, and create an economic burden that will more greatly impact women. The march was also in support of the LGBTQ community and people of color who may be adversely impacted by policy reversals, as well as immigrants and people of non-Christian faith, all of whom were targeted in the president's speeches as a candidate. The march was about a host of issues and a pattern of behavior, none of which Trump's supporters seem to acknowledge as actual issues. But the march was also about publicly stating what issues the participants support and see as a path forward. In that - this was a peaceful march, and - I would say, it wasn't angry. It's the beginning of a diverse and often splintered portion of the populace that was using the inauguration as a catalyst to get started on the next four years.

That's really the tip of the iceberg.  I am not optimistic about our duly elected Chief, and I am as concerned about his worldview as I am about his fitness for the job.  I'm, perhaps, more concerned that 60 million+ Americans saw the same campaign I did and voted for the man on election day and went home and slept just fine.

But the march cheered me tremendously.  If we're in this for the long haul, we just saw our colleagues.  And as someone who has marched before and almost always regretted it (nothing like realizing you're marching alongside a 9/11 Truther to make you question every belief you ever had that made you think showing up at this march was a good idea) - there was none of that this time.  The posters may have focused on a range of topics, but right now, there are a  host of topics I'm keeping my eye on.

Hope all these people are at the polls in 2 years.

The march was pretty cool here in Kansas City as well. No violence at all. Lot of families, very chill. Almost like a street festival, but with signs and people cheering speakers on a stage. Very glad I went. It was the elixir I needed after the dispiriting shitshow of the inauguration.

Seems weird to say this but I'm very proud of both you and Jamie. I'm on a business trip in Vancouver this week and there was even a march here.

Thanks, man. I'm very proud of Stuart for doing the same up in his area. I'm lucky to work in a place where I know I don't need to keep this sort of thing on the downlow (I saw a number of my colleagues and they told me they'd seen others of my colleagues). Not everyone gets that privilege. And I'm very proud of Jamie for her drive to get us out there once the conversation was started.

Let us hope that, even if no minds were changed from spectators (and I doubt they were), then we're seeing the beginnings of galvanizing a splintered and diverse body that tends to infight much more than it effectively makes a case for itself to the public.

Keep doing your part in Canada, and we'll see what we can do to restore the America our neighbors believed in

Good post! Glad you guys went! Personally, even politics aside, I always like the posts where you're sort of reporting on some sort of live event. Always interesting to hear the perspective of the "man on the street" as opposed to the newspaper version of events. Also, I agree that the 50,000 number seemed conservative. There's no way that the crowd down there would have only filled half of DKR Stadium.

Yeah. I, too, was looking at the crowd and thinking "this seems bigger than DKR crowds". I will say, in my initial enthusiasm, I think I said "there must be 300,000 people down here!" but that would have killed downtown. Given traffic leaving, etc... it certainly felt like a football game or 6th Street Halloween, which can get up there.

I'd do more posts on live events, but we don't go anywhere all that often...

I think you need a new occasional feature called, "Escape from Planet Couch". Maybe you could start by spying on Paul Toohey for a few hours without his knowledge.