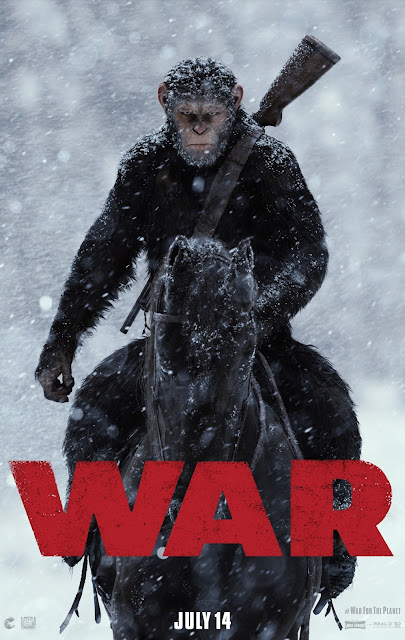 I was skeptical when Matt Reeves and Co. relaunched the Planet of the Apes franchise a few years back.  We're big fans of the original five films here at The Signal Watch - but despite a certain affection for Tim Burton and an appreciation for anything with a simian in a featured role, I've only seen that remake once.  Because I kind of hated it and wound up having to apologize to several friends who agreed to go see the movie with me.

So, yet another go at the idea wasn't something I was looking forward to initially.

But, lo and behold, Rise and Dawn of the Planet of the Apes were released, and, yea, I dug them. They managed to find an astonishing line where they could break from the original narrative but still give nods enough, show respect for those movies and still be entirely their own thing.  If Caesar wasn't the child of apes who'd traveled through time and space, we still found a way to make him the founder of the Ape Society that didn't need to bend time and space to get the job done.  And if I always stood by the complex heart of the original slate of films, the new movies refused to be any less challenging.

I'm pleased to report that War for the Planet of the Apes is a worthy conclusion to the trilogy, an astonishing technical achievement, and - as all the apes movies have been (save the Burton one-off) a thoughtful character study and examination of morals.  And, of course, a dystopian sci-fi franchise that actually earns its dim view of humanity.  It isn't just ignorance or folly that leads to man's downfall, it's mankind's inability to tame our demons that drives us straight over the cliff.

This movie picks up not too long after Caesar (Andy Serkis) fought back against insurgence from within his ranks, brokering peace between man and ape in the ruins of San Francisco - only to see the human military arriving.  For about two years, the apes and the military have been at war - and we can only guess what happened to the humans left in San Francisco in the wake of the military's arrival.

After a few initial skirmishes and losses of key members of Caesar's inner-circle, the apes decide to follow a path through the desert to a new and safe home far away from humans living on the coasts.  While Caesar sends his people ahead of him to the new homeland, he can't let go of the damage done by "The Colonel" (Wood Harrelson), who has dogged the apes despite peaceful overtures.  Ape shall not kill ape, but they can kill a human, and Caesar pursues the Colonel and is joined by a small cadre of his closest friends who are, frankly, against the plan.

Along the way, they discover a young girl who has lost her ability to speak - a beginning symptom for the downfall of man that anyone familiar with the earliest two POTA movies will recognize.   A bit further along, they find a solitary ape - one from a zoo - who has also learned to speak, but not sign, and has not learned to reason with quite the same tenacity as Caesar's people.

Despite the fact this was my third of the Reeves' directed Apes films, and the fact I watch a big-budget visual spectacle of a movie about once every week or two, the achievement here is beyond outstanding.  I can't entirely grasp how far CGI has truly come until I get a chance to spend two hours with entirely CGI constructions overlaying skilled actors, and I believe every hair and wrinkle on Caesar's face.  In fact, every red vein in his bloodshot eyes.  The nuance in those great faces is unbelievable.

Serkis' performances are now legendary, from Smeagol/ Gollum to Lord Snoke.  He's mastered the art of the virtual performance - and here, 3 movies in, the technology and Serkis are so seamless, the barest nuance is captured - and Serkis' portrayal is one of small looks and glances, a reserved George Washington of a general trying to restrain himself despite the injustices and cruelty.

Hollywood movies, especially massively expensive effects movies, need to meet certain narrative expectations, and instead what we get is two hours of a great leader struggling with the very notions of morality which he's held high for his people, giving them a foundation upon which they can build their society.  Where Liam Neeson would now spend 90 minutes chasing down those who had wronged him, disembowling anyone who came across his path, Caesar wrestles with what he's given up not just for him, but his people.

It's a hell of a thing to put out there.  And, thus, in many ways this movie was not at all the movie I thought I'd signed up to see.  It's a more intimate story and more nuanced discussion than "if the apes hit the humans enough, they get to run the planet", which is more or less what posters and the title suggest.

That the war for the planet is actually being fought between humans, half of whom we never really get to see, is astonishing.  Let alone that Harrelson's character - like all good antagonists - probably has a legitimate point and has made terrible sacrifices that do make sense, even if it's at the cost of our protagonists.

It's incredibly brave of the filmmakers to sideline the apes and plan their escape rather than arm them and have them descend on humans.  Their culture of mercy is so woven into the film that it upends traditional summer-actioner structures in order to maintain narrative cohesion.  That's no small thing and impressive that the studio was willing to go for it.

But it's even more remarkable to show the greatness of a leader is not in chest-thumping or following vengeance, but in moments of decision, remaining true to one's virtues - not giving in to fear or anger or a broken-heart.  And sacrifice.  And mercy.

Woody Harrelson's character isn't anyone you haven't seen in a film before, and - in fact - it's a single-minded military rogue like you see at least in one movie per summer.  For the most part, it's faultless performance, and I'm not complaining.  It would have been interesting to see what other actors might do with the same material, but Harrelson is buyable and it's utterly believable he'd lead a bunch of scared soldiers through swagger, a martinet giving the last humans something to focus on to believe they might make it.

Steve Zahn as "Bad Ape" is a surprising last minute addition to the series as comedic relief (Bad Ape in his winter gear is one of my new favorite images).  Karin Konoval's studied portrayal of Maurice - the orangutan cheekily named after Dr. Zaius actor Maurice Evans, gives a soulful weight, a thoughtful near-spiritual advisor to Caesar.  I'd liked Maurice in the two prior films, but here we get to love the character.

Look, I love the first series of Apes movies, and nothing will ever really replace them in my heart.  But it's dishonest to say the series wasn't a trifle uneven, maybe strayed into some bad ideas here and there.  To see a return to the POTA concept that wasn't relying on nostalgia or camp was truly amazing.  One can imagine that someone with love for the original films might have seen the reboot as an opportunity to go comedy, dim it down to an adventure story with a twist - but Reeves understood what those first five films were saying, and it never left the DNA of these new films.

Most astonishingly, this is the end of at least this part of the history of the beginnings of Ape culture.  We may know that there's an astronaut named Taylor out there en route for a return to Earth, but that's background noise now.  This was a trilogy of very different stories about one character, Caesar.  And that everyone involved respected that all we needed to do was wrap up this life-spanning adventure is no small feat.

Until you mentioned the CGI I hadn't even thought about it. That's how good it is.

At one point when the apes had dismounted and were walking in the snow, I just stopped and thought "holy @#$%... how did they do this? Why doesn't this look awful?" and after that, in a few close-ups on Maurice and Caesar, I just couldn't believe what I was looking at. The artistry is insane.