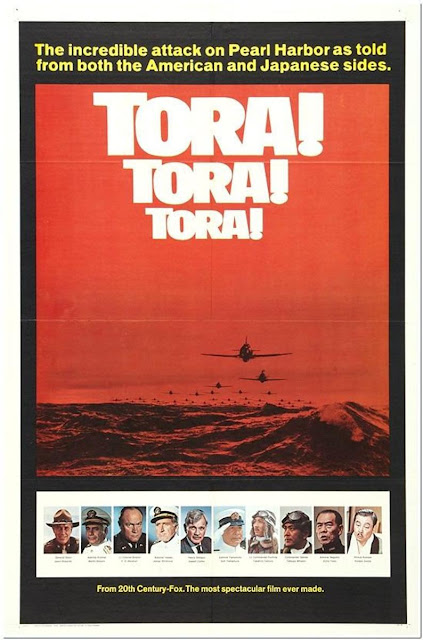 
The Japanese portions have a somber, meditative quality, Admiral Yamamoto sure of the success of Pearl Harbor should they strike, but - having some experience with America - knows that America is not going to be the easy defeat presumed by the Japanese, including his officers, all of whom beam with the excitement of going to war.  Seldom has such an all-out victory on film felt more like a crippling defeat.

The Americans, by age both young and old, are the brash young men of the film, cocksure and not actually ready for what they're about to get involved in - and unable to cope with the massive scope of government and empire between Hawaii and DC.  Even more - simply unprepared for the changes in warfare that Pearl Harbor would thrust upon American forces - air warfare last seen in WWI as a primitive air show with machine guns in comparison to a squadron of Zero's with the best pilots on the planet.

For the part of the Americans, it seems they cast half the "that guy" white, male actors over 40 in a range of parts from Secretary of State to radio operators, the biggest names in Joseph Cotton as Henry L. Stimson and Jason Robards as General Short.  But if either gets in more then 10 lines, I'd be surprised.  Director Robert Fleischer is on a mission to show every player in the event (at the behest of Zanuck, for whom this was a passion project) and spreads himself and the audiences ability to take in new information a bit thin as he leaps all over, representing the actual players and their actual roles - things that would be simplified or streamlined into composite characters in another film.

It does work, in it's way.  It's not the best filmmaking, but it does show by act or mistake - how many cogs were in the machine and how moving parts could miss or break.  Personally, I'd rather a film fail with overwhelming accuracy and abundance of detail when dealing with historical filmmaking than fabrications to make it easy for the audience (we all need to be better about understanding how stuff actually works) - but I do recognize that this is burdensome on everyone both watching and making a movie.

That said - the Japanese side has this figured out pretty damn well.  They include everyone, but by focusing on about 3 key players (a pilot, the admiral, a bureaucrat) they're able to go deep instead of wide, but still include real people in their orbits.

You will cringe your way through the mistakes in the American lead-up to the attack - some well known and all documented here in 2019.  I read that Zanuck was trying to absolve General Short for his decision to group the American fighter planes together on the ground to avoid sabotage, but...  yeah, it sure as hell hurts when he says it out loud, even if we know why.

People react badly in a crisis.  Don't let most movies and their streamlined approach to what people do in a crisis fool you.  When shit hits the fan, people want to keep doing exactly what they are doing without interruption or they literally hear the gunfire themselves (and even then...).  We all want to believe it's a drill, and we're all too cool for drills and have stuff to get done - even (or especially) when they know it might be a real incident - it seems they want to forget the protocols or make someone else responsible.  And there's a lot of that in what's shown.

That's more or less the story shown on the US Side.  Even our well-trained forces are at the mercy of our bureaucracies, Sunday casual plans, and a whole lot of disbelief that people are seeing what they're seeing.

"Tora! Tora! Tora!" was the codeword to begin the attack on Pearl Harbor and is roughly translated as "Attack! Attack! Attack!"  And so begins a wildly detailed second act of the film (it has an intermission) where the Japanese finally do head into Hawaii.  You can tell here that the joint effort pays off, cross-cutting the devastation and its mighty scale with the various reactions of our players on both sides.

Apparently the battle as depicted is actually longer than the 30 minute attack on Pearl Harbor as the directors wished to show what was occurring from multiple points of view.  In 1970, we still had surplus planes that could be destroyed for the movie and whomever built the model ships did an outstanding job.  All in all - the battle is a marvel, especially compared to Michael Bay's CGI-gritted attempt at same.  But comparisons do remind you - for all the players shown, it is largely senior officers, etc... and the POV of the everyday sailors, airmen, soldiers and pilots is more or less shoved to the side for the duration of the film, which... fair enough.  There are lots of movies about GI Joes.

It's a fascinating film in many ways, and where it doesn't work particularly well as a movie, it does work as an historical document, especially as one that shows both how quickly enemies that had been utterly alien to each other before the war seemed to find common ground so quickly in the aftermath.  There's so much at play here, as a sheer historical novelty, it's worth checking out.

I remember watching this in my High school American History class

I'm impressed the teacher decided to blow a week's worth of classes watching this movie! It is not short. Also impressed they didn't blow through WWII in 1-2 lessons.

The only thing I remember from the movie is that "Tora" means Tiger in Japanese.

I also watched All Quiet on the Western Front in one of my classes.

Yeah, I wikipedia'd Tora. It DOES mean Tiger, but - I guess because it's what they do - it also means "Attack". I am unclear if it means a specific kind of attack, because there was some evidence it meant sea-attack or something. Which seems weird for a Tiger attack, but, hey, I am not questioning a culture that's 1000's of years old vis-a-vis their view on the dangers of tigers.

The book of All Quiet was usually 9th or 10th grade English class assignment reading to really bum you the hell out about what a draft was going to do to you.