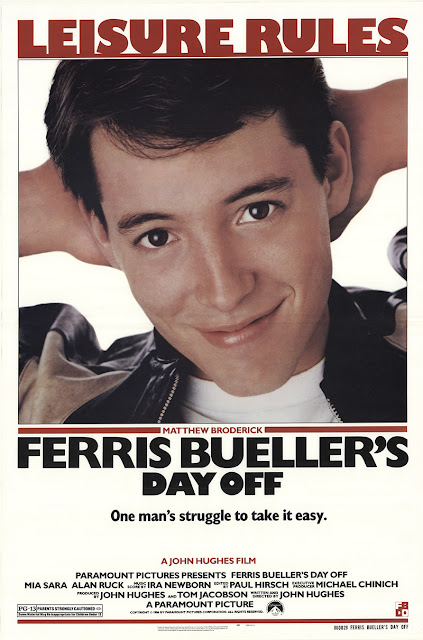 There's no point in talking much about Ferris Bueller's Day Off (1986), one of the most discussed movies of two generations.  And, of course, Josh Gad's web series Reunited Apart recently brought a gaggle of cast members back to discuss the film.  On this note, Jamie suggested we give it a watch - which we hadn't done in a few years, at least not in pieces, edited, on cable.

I have no idea what today's kids see when they look at the movie.  The idea of wealthy, white kids running around Chicago without consequence, with a suggestion of sex between the leads, would surely get a social media tsking, and a shocked look from kids who can't understand teens not getting a ride from mom or just spending the day online playing Fortnite.  I don't know.

It holds up, in its way - at least for those of us who for whom it was a staple and cultural touchstone.

In 1986 I saw the movie with my parents (I would have been 11), who gave me some surprising insight into what they thought of me at the time by repeatedly saying "Ryan, don't get any ideas".  It is fine - I did not.  They really underestimated my form of laziness where it was easier to just go to school than make up the work.  I don't think I cut class til college.

It really is an amazingly well put together comedy with an outstanding cast.  I mean: Edie McClurg, people.  But naming names - you all know who is in here and what they do.  The funny thing is, the older I get, the funnier I find Jennifer Grey.  She was always funny - but that seething, misdirected rage is just... amazing, as is her turn at the end.

And how can you not like a movie where they watch The Cubs play?

Anyway - yeah.  You know the movie.