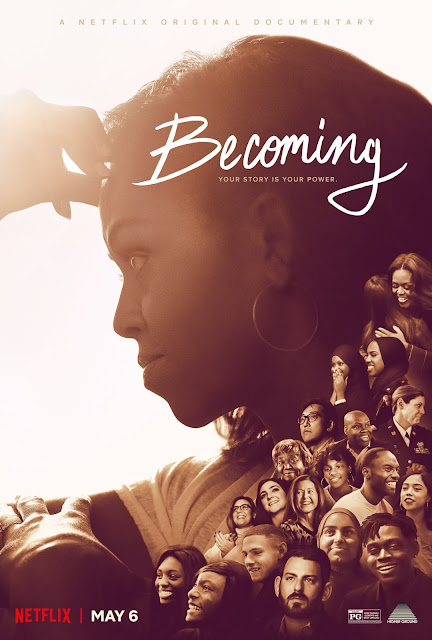 
While I was not always keen on every aspect of the Obama presidency and policy, like Laura Bush, she'd found her niche and worked in it (Laura Bush's work for literacy and reading for children was and remains phenomenal).  But Laura Bush was of her generation and - to me, deeply recognizable - Texas upper middle class background, and Michelle Obama was someone who came from Chicago's South Side and made it to Princeton and Harvard.  That's not nothing, people.

The doc intercuts Obama's book tour, which was a stadium affair in some cities with interview and other background material, including longtime staffers and one of the funniest moments in the astoundingly dry delivery of her Secret Service assignment.  It feels like a scene from Parks and Rec.  Other, very good bits, include her circle conversations with young women in various towns around America, including my former town of Chandler, Arizona.

The doc feels surprisingly personal, as Obama brings cameras backstage discusses the past honestly and with answers that sound neither rehearsed nor particularly sanitized.  It may not be a bad thing to hear a former FLOTUS discuss how the fabricated mischaracterizations and racially-tinged criticisms impacted her as others treated American politics like a game with points.  She introduces us to her mother and brother, and while always the composed Michelle Obama we're used to (this is not an ambush interview doc) it's also more warmer and more relaxed than you may see many former FLOTUSes.

I don't expect people who have been irritated by the Obamas for 12 years are going to be convinced by anything the former FLOTUS has to say now, or what she's trying to do or accomplish.  And, I'd argue, that's not who she's trying to reach or contact, anyway.   But for those of us who remember why we voted for Obama twice, being reminded of a country that spoke in terms of hope and better lives for *everyone* is something you might find you miss more than you realize.  And while I don't think Michelle Obama has any intention of running for office, and this isn't her intention (I more suspect she's aware of the power of media and intends to flex that), you also walk away pretty sure - she would have been the sort of person you actually want running your government.
Posted by The League at 6/28/2020 11:54:00 PM