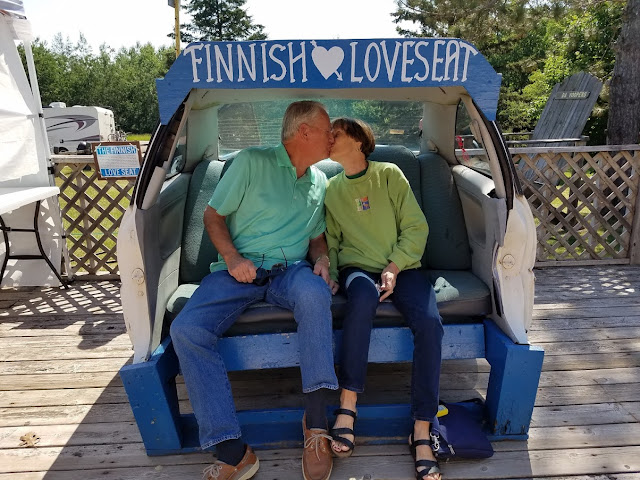 Today marks the 52nd anniversary of my parents, The Admiral and KareBear.

These two have made it through all sorts of nonsense over the years, not the least of which was weathering raising me, which was no picnic.  Anyway, they're still the dream team of parenting and now grandparenting, and their own partnership gave me a pretty good model for how to make one of these marriage things work.

Of course Jamie and I can't be with them on their Anniversary, but as they live in town, we've been meeting up on weekend mornings in my backyard, socially distant and all that.  It's been really great, honestly.  (On opposite weekends we've been trying to drive to San Marcos as Jamie's dad has a *great* back porch that gets a breeze in the evening).

The picture above is from last summer when Jamie and I visited my mom's original stomping grounds in the Upper Peninsula of Michigan.  She's the child of Finnish immigrants, and they still very much celebrate Finnish heritage in the U.P. *  She met my dad when he was stationed near her hometown working on B-52's during the Doctor Strangelove days.

Anyway - congrats to these two.  52 years is nothing to sneeze at.


*My dad is an American Mutt.  Name a Western European nation, and he's got a bit of it.  And probably a lot of things we don't know about.  We were all very disappointed to learn our last name is actually English and not a mangled European name spelled out phonetically at Ellis Island.
Posted by The League at 6/29/2020 08:03:00 AM