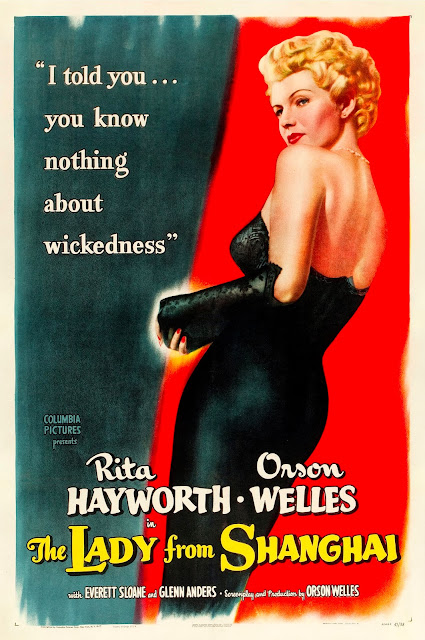 
The story is loosely: a sailor walking Central Park spots a beautiful woman in a hansom cab, and tries to pick her up.  She brushes him off, but he soon comes upon her hijacked by a gang of thugs whom he manages to take out.  The woman (Hayworth) is Elsa Bannister, whom Mike O'Hara (Welles) learns is the wife of a famous trial lawyer, and she wants to offer him a job on the yacht, despite (or because of) his stated attraction. He turns it down, but her husband - a man walking with two canes (I took it as a man who had suffered polio in his youth), finds O'Hara and brings him aboard.

From New York, through the Panama Canal and up to San Francisco, Mike works on the boat and engages with Elsa, the two finding occasional private moments.  In Mexico, they're joined by Bannister's partner, Grisby - a giggling fool who sees too much.

Hayworth as a femme fatale, has her motivations, tempered by fear and indecision in a way that's never exactly spelled out, but is there, bolded, between the lines, and that thing holding her back impacts everything.  She's not *great* here, but she works perfectly in the role of a somewhat inscrutable and unpredictable figure who *seems* like a damsel in distress, but is a mess of broken glass best not touched.

Loaded with class war, and - as O'Hara puts it - sharks devouring each other, the movie has a strange tinge of Who's Afraid of Virginia Woolf? mixed in with your noir.  There's a viciousness to the movie that has a certain grounding even in the bizarre circumstances of the film, and makes the kind of remarkable choice to have O'Hara not play ball with the weird, three-way mutual destruction society of Bannister, his wife and Grisby.

The deliver of dialog in the film features/ follows a certain rhythmic delivery Welles has in other projects going back to the Mercury Theater.  People talk at each other in declarative statements, and it's hard to tell if they're listening to each other, but they are trying to convince one another of their POV.  You could look away from the film and hear much of what's happening as a radio drama - but of course you'd never fully get the famous Crazy House (borrowed endlessly for cartoons and Joker hideouts til the end of time.  And maybe inspired a certain sequence in Enter the Dragon).

The movie has a curious eye - and has been discussed as a sort of textbook on what film critics mean by "the male gaze".  Literally, we have shots through telescopes and spy glasses of Hayworth - something Welles must have been well aware was happening whenever he was out with his wife as America's favorite bombshell.  The men watch her hungrily, jealously and contemptuously.  It also features some fascinating work in places like the aquarium where the characters fall into shadow against a backdrop of sea life.  But close-ups are also - except in the case of a placid-faced Hayworth - sweaty and desperate.

There's no one to really root for, and maybe that's part of the challenge of the movie.  Mike tells you at the outset "here's the stupidest thing I've ever done", and then you watch him do it.  And everyone else seems half-crazy with a mean streak.

But I've liked this movie since I first saw it, even if I don't immediately reach for it for something to watch.  It's a unique bit of cinema that seems to, as JAL would say, exist only for itself.  Maybe because of and in spite of all the off-screen drama.  But it's a weird, mean little movie, and it was a pleasure to return to for the first time in a while.
Posted by The League at 7/01/2020 11:39:00 PM

Really nice summary of what's great about this film! Endorse 100%.