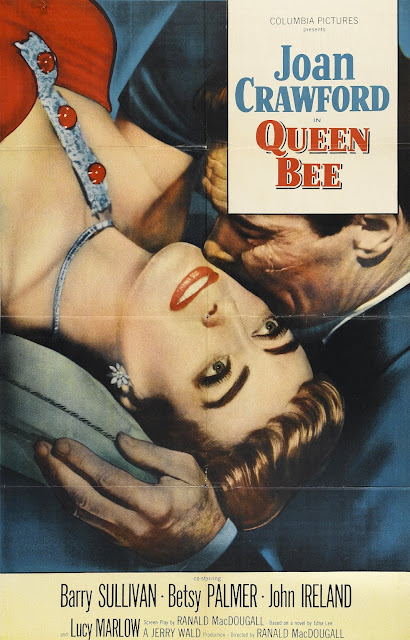 Watched: 06/22/2021
Format:  Amazon Watch Party
Viewing:  First
Decade:  1950's
Director:  Ranald MacDougall
Jenifer was good enough to host a watch party this evening and selected Queen Bee (1955), a film from Joan Crawford's mid-40's to mid-50's cycle.
I'd label the movie as a "Southern Gothic Melodrama", and I wouldn't be shocked to see it pop up on Noir Alley, either, but not til we've exhausted other films like Flamingo Road, which fits the bill better.   I genuinely enjoyed the film, in part because it's so bonkers and done with complete sincerity as Crawford manipulates everyone around her in a grand old house in small-town Georgia.
The film co-stars Barry Sullivan and John Ireland, but our POV is the young cousin of Crawford played by Lucy Marlow, who arrives after her schooling to be a sort of companion/ secretary to Crawford.  But I just figured out the woman playing one smaller role was Fay Wray, aged 48 or so.  Mind officially blown.
You can't not comment on the fact that Crawford was 50 or older when the movie was filmed and is still playing a woman who is probably supposed to be no older than 35.  I can never think of anyone who pulled this sort of thing off in the studio-era for as many movies in a row who wasn't Mae West.  But casting contemporary Wray against her as a former rival for the affections of Barry Sullivan, is no mean feat.  And, look, it's not a criticism.  Crawford's make-up was more a problem by 1955 than the actual aging process, and in some shots and in some entire films from the era, it works.  Crawford herself is no less powerful an actress, and one wonders if she dialed it back how she might have appeared (although her hair in this film is the tight perm of the mid-50's that did few women any favors).
But, yeah, it's a tidy 100-or so minutes of Crawford wreaking all sorts of havoc upon her own family and their lovers.  It's got some outstanding dialog, terrific cinematography (Charles Lang), and you can't outguess the movie as it unfolds.
Posted by The League at 6/23/2021 12:51:00 AM

I wonder which movies from 2010-2021 and beyond some person in the future will watch and write / podcast about.

You really never know. Some movies that were considered huge in their day have become footnotes, while B-movies or less successful films continue to find an audience year after year. I think about the Very Important Dramas of the 80's, and I doubt they're taught or discussed in film schools or that young adults are seeking out, say, Kramer Vs. Kramer. And, of course, some films get a rehabilitated reputation over time that were critically dismissed upon release. But I think we'd all do well to think of film more like books on a shelf, and stop insisting new and novel is inherently superior to the vast stores of the past 120 years or so of cinema.