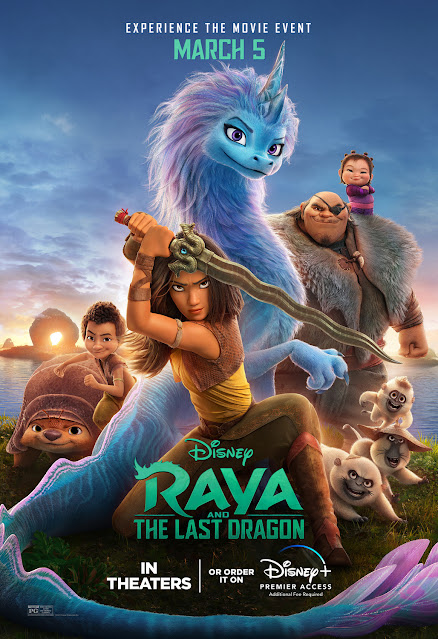 Watched:  07/18/2021
Format:  Disney+
Viewing:  First
Decade:  2020's
Director:
I had very much wanted to see Raya and the Last Dragon (2021) in the theater.  Disney and Pixar are creating big-screen-worthy films left and right, and I already have two Pixar films under my belt since December that I will see if they're re-released post-COVID.
For some time, Disney has been making Princess movies from all over the planet, from Frozen, to Moana, to Tangled and now Raya and the Last Dragon.  I admit to some confusion in this film because the film skips around a wide swatch of Southeast Asia and the various islands and archipelagos, but it's all Disney Fantasy Land, so I think marrying yourself to any particular culture here is as useless as figuring out which Scandinavian country where Frozen takes place.  But, nonetheless, you may find yourself saying "is this Vietnam, or Thailand, or...?"
Anyway, I was surprised in a very good way that RatLD turned out to be an action/adventure picture - really the first in the modern Disney era.  Expect no song and dance sequences - this is a straight adventure where the Maguffin is "friendship".  Because Disney.  But, yeah, Disney has definitely done non-musical movies in recent years with the Wreck-It-Ralph movies, Zootopia and Big Hero 6, but if you see "princess" and think "what is her 'I Want' song?", you will be disappointed.
There's some terrific camera work, design, lighting and voice performances, but I will confess that it took me a beat or three to get invested in the movie.  There's a lot of what feels like set-up, and it doesn't do a ton to tell us about Raya, it shows us (god bless it) what happened.  But it's like... maybe too much?  Frozen did this pretty well with a sort of storybook opening of flashes of what had occurred, and I'm not sure what drove this approach except that there's so much.
I'd also have liked *some* explanation of the Druun.  It's too big of a presence in the film to go without more than "oh, yeah, those things are gonna murder all of us".  Or maybe existential threats are the new thing for kids movies.  But it all feels like avoiding a Beauty and the Beast opening, when maybe that would have been most effective.
Nonetheless, the human and animal characters are mostly delightful.  Con-Baby is super weird and will be something current kids will make into a meme in 12 years or so.  But, as usual to my experience, Awkwafina is a delight as the titular Last Dragon.  And I think the all-star cast led by Kelly Marie Tran, and rounded out by tons of name talent from Gemma Chan to Daniel Day Kim are all pretty great.
In particular, the last third works pretty darn well as things get real and themes get sewn up.  The action and fighting animation is phenomenal, and it's pretty cool to see a lot of that.  The dragon animation is also a delight, and made me long for a big screen presentation.
I also have to give the animators a thumbs up for coming up with Tuk Tuk, the giant whatsit that Raya counts as both her pal and a reliable mode of transportation.  Solves a lot of story problems and presents a terrific visual.
Posted by The League at 7/20/2021 12:13:00 AM

Just a plug for Awkwafina’s “Nora from Queens.”