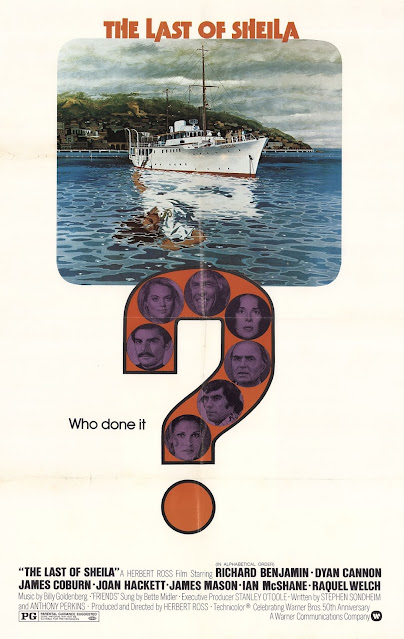 Watched:  07/20/2021
Format:  TCM on DVR
Viewing:  First
Decade:  1970's
Director:  Herbert Ross
What a weird combo of talent on this film.
I recorded this on my DVR when Rian Johnson indicated it had helped inspire the sequel to Knives Out, recently filming in the French Riviera, where this film, The Last of Sheila (1973), takes place.
I did not know that it was written by Stephen Sondheim and Anthony Perkins - two guys not known for Hollywood movie scripts.  Then, it was directed by Herbert Ross, who you may know as the director of The Secret of My Success or Footloose.  The cast is small, but as in Agatha Christie style, everyone has to carry their weight.
But what a cast:  James Coburn as a movie producer, Dyan Cannon as a talent agent, James Mason as a director past his prime, Raquel Welch as a starlet with a past, Ian McShane as her iffy boyfriend, Richard Benjamin as a screenwriter seeing his career fail, and Joan Hackett as his heiress wife.
The titular Sheila dies in the opening scene, the victim of a hit-and-run as she drunkenly leaves a party to walk her Bel-Air neighborhood.  A year later, Coburn invites a handful of the attendees to his yacht in the South of France for a week of games, one of which is a game of his own making.
I won't say anything else.  No spoilers.  But the movie is a murder mystery with more twists than an industrial drill.
Go check it out sometime. 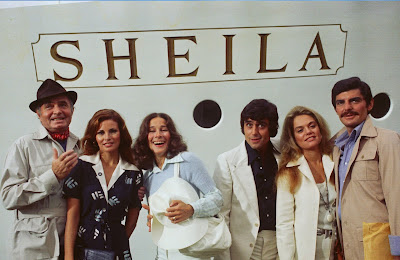