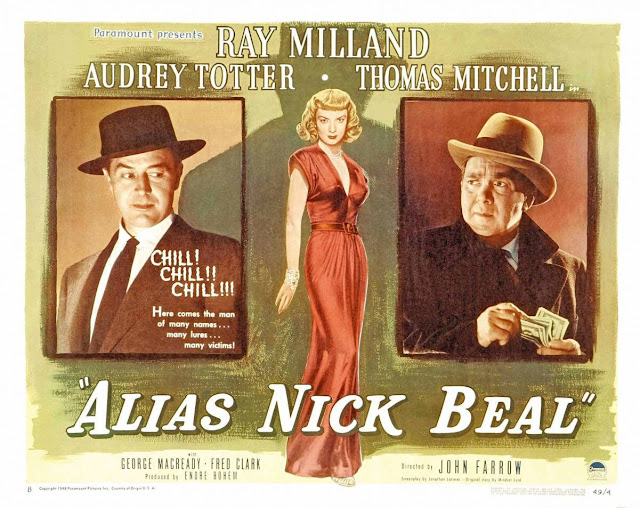 Watched:  07/18/2021
Format:  Kino Lorber BluRay
Viewing:  Second (and kinda third)
Decade:  1940's
Director:  John Farrow
I saw this one a few years back at the Austin Noir City fest hosted by Eddie Muller, but haven't seen it since.  It's a prime example of a good movie to sit down and say "is this noir?", because I don't know.  It sure as hell feels like noir, minus the supernatural elements.
This time I was able to watch the film and then immediately come back (when Jamie had gone off to bed) and watch the film with commentary by Eddie Muller.  It's worth noting - because, as he states, it's been years since he did a commentary track, but he did this one because he likes the movie that much.
The film itself is a very 20th-Century flavoring of how a good man with the best of intentions can compromise his way right into corruption when it comes to elected office - with an extra shove in the wrong direction from a sharp-dressed demon.  It doesn't hurt to understand a bit about 19th and 20th Century political machines, but the film is mostly concerned with literal forces for good and evil over a man's soul (the evil being Nick Beal), tempting the pious Joseph Foster with the ability to do good at scale, if he just compromises endlessly along the way.  And, of course, turn his eye from his matronly wife (his voice of piety) to Audrey Totter.
My big takeaway from the first screening was "Geez, Audrey Totter was good".  And, interestingly, a lot of the commentary track was dedicated to discussing how this movie may have been one of, if not *the* best showcase of her talents.  She isn't the lead, but she's in a unique position as the one character in the film who is well aware Nick Beal is scheming, even is she doesn't know why.  But it let's her play a lot of things, not the least of which is acting that she's acting in a particularly great scene in the film where Nick (Ray Milland) has given her lines to give Joseph (Thomas Mitchell).
There's terrific cinematography by Lionel Lindon - pure noir stuff which would be your first point in considering its bona fides, and I'd argue that director John Farrow did a phenomenal job of bringing together performances that are just the right tone to keep the film from feeling over the top.
The movie is a bit different and, if read wrong, may have feel a bit old fashioned or hammy, but - as Muller rightfully notes in the commentary - there's a lot for anyone to consider in our current political climate.
Look, everyone in this movie turns in their best, so even if it's not necessarily your cup of tea (it is mine, certainly), it deserves some reconsideration as a film that's languished in relative obscurity for decades.  And if you're a Totter fan, it's an absolute must.
Posted by The League at 7/19/2021 05:26:00 PM