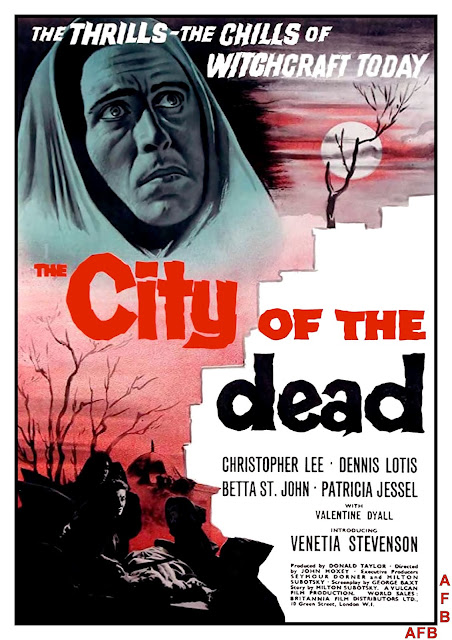 Watched:  10/24/2021
Format:  Shudder Elvira Special
Viewing:  First
Decade:  1960's
Director:  John Llewellyn Moxey
I am unfamiliar with this studio, Vulcan Productions, but it's out of Britain.  That said, in theory the movie takes place in Massachusetts, and is a witchy story about a small town where there's still witchy business afoot 400 years later.
The movie stars a whole bunch of people I didn't know, and I think English people playing Americans, which would explain at least one guy's voice.  But it's got Christopher Lee!  So, super double bonus points.
The movie isn't bad!  It's mostly thriller as young people first try to do some research for a college course, and secondly when others go to look for the first person.  The sets, acting, etc... are all good stuff.  I particularly liked Patricia Jessel as a creepy inn owner.
Anyway, I mostly watched it as past of Elvira's 4 movie hosting gig on Shudder, and she's terrific!  Good bits in there and what I believe to be a true story of her running into Christopher Lee in a window that I believe would have had to have been pre-Elvira.  Anyway, she has a kicky song at the end I very much enjoyed.
Posted by The League at 10/24/2021 03:43:00 PM