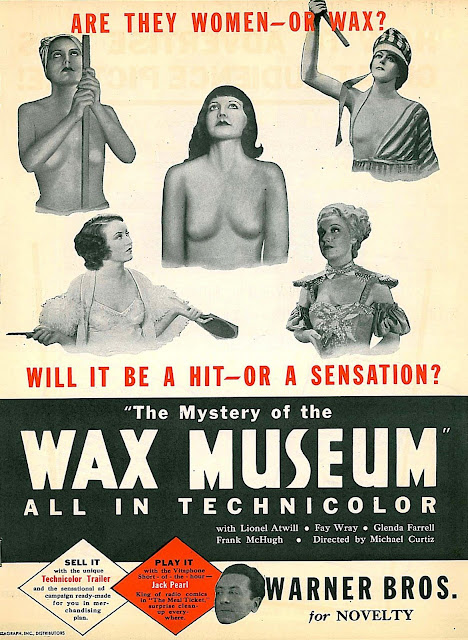 Watched:  10/30/2021
Format:  I am not sure?  DVR
Viewing:  First
Decade:  1930's
Director:  Michael Curtiz
So, this movie, Mystery of the Wax Museum (1933), is the one that the 1953 Vincent Price film, House of Wax, is based upon.   The plots are somewhat similar, certainly the set pieces and locations.  I think this movie, in turn, is based on a story and stageplay.
Two fascinating things here, tho:
1)  I've never watched a whole film in the two strip technicolor process.  It's weird as hell.  Perfect for horror, I think, but I imagine this gives me an idea how some color-blind people see the world, but in a weird inverse.  This is all reds and greens.
2)  It's mid-career work by Michael Curtiz!  Maybe one of the most versatile directors I can name, it's interesting to see him doing 30's horror and doing it so well
This movie differs in many ways from House of Wax, including a very 1930's woman reporter who is really the catalyst for most of the action, and I adored her (played by Glenda Farrell).  The great beauty that the crazed sculptor pursues is no less than Fay Wray, so... understandable, despite your murderous, psychopathic ways, sir.
The movie refuses to take itself too seriously, but does a great job of a grand guignol-type horror but with a fast-talking news woman anchoring the whole thing.
I'd love to re-watch this one at some point, especially with other folks.  It has some terrific stuff the 1950's one eschewed for a more solid plot, but this one is equally entertaining in its own, incredibly 1930's pulpy fun way.
Posted by The League at 10/30/2021 04:58:00 PM